VIFF #2: Come into my painting said the spider to the eye

Lech Majewski's "The Mill and the Cross" takes place inside Flemish painter Pieter Bruegel's 1564 The Way to Calvary -- as the artist observes, imagines, designs, sketches and paints it. I like to think of it as "Bruegel's 8 1/2," and I have rarely seen more absorbing and imaginative uses of blue-screen and CGI in movies.

Not that it's that simple. An article in American Cinematographer describes the film as "a three-year project that took [the filmmakers] to the Jura Mountains of Poland, the Czech Republic and New Zealand for 48 days of filming, followed by 28 months of postproduction at Odeon Film Studio in Warsaw. Production and post immersed them in digital technologies that included the first Red One to arrive in Poland, 2-D compositing in Flame and After Effects, 3-D compositing in Nuke and Fusion, and 3-D graphics in LightWave." Yeah. 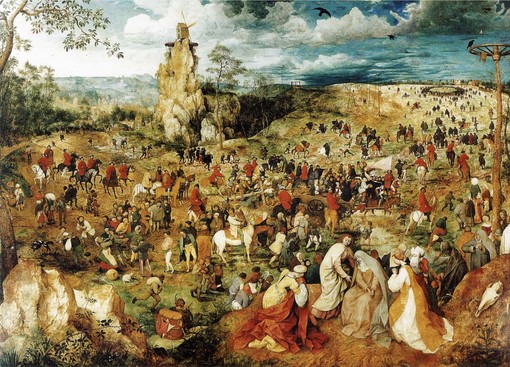 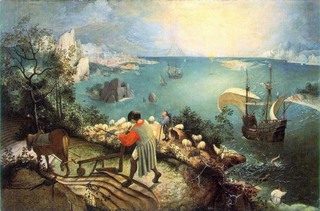 Breugel (Rutger Hauer, acting in a world as fantastical and visually striking as that of "Blade Runner") wanders through the landscape of his painting, occasionally explaining his plans and methods to a patron played by Michael York. Charlotte Rampling is also featured as a model for the mother of Christ. But mostly they, and we, just watch. Breugel examines a dew-bejeweled spiderweb and is inspired to structure his painting along the same lines, with the principal event (Jesus stumbling while carrying the cross to Golgotha -- transposed to Flanders) in the center, yet surrounded by so much other activity (hundreds of other figures going about their business) that it is nearly lost, like the titular event in the artist's "The Fall of Icarus." At the upper left is the Tree of Life and the Circle of Life (the town); on the right, the Tree of Death (breaking wheel raised on a tree trunk) and the black Circle of Death (Golgotha).

To create the panorama (light on the left, getting darker on the right), Bruegel is said to have painted "The Way to Calvary" from seven different perspectives, and to have employed lighting from different times of day -- all on the same approximately 67 by 49-inch canvas. About 500 human figures populate the landscape, from scampering children to red-coated Spanish crusaders on horseback to the miller on the rock high above the scene, looking down upon it all like the Eye of God. 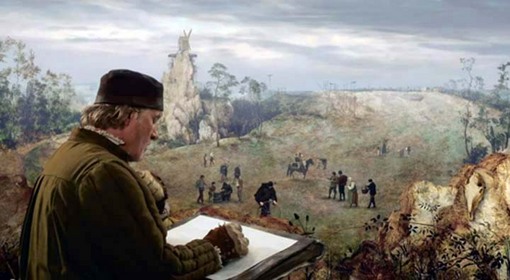 So, what is the story of the film? Well, it's the story in the painting, of course -- and the story of Breugel's developing vision for how to paint it, and the challenges he faces in realizing it. (In that sense I am reminded of the great audio movie "Don't Crush That Dwarf, Hand Me the Pliers" -- because I am always reminded of Firesign Theatre -- and the mural Porgy and Mudhead discover at Communist Martyr's High School, titled "The Heroic Struggle of the Little Guys to Finish the Mural.") 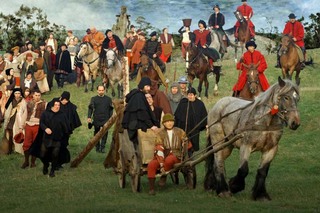 "The Mill and the Cross" is a movie -- like Jacques Tati's "Playtime," and like the painting itself -- that invites you to climb in and look around. From the third row of the theater (my preferred seat), where the movie nearly fills my field of vision, I found myself craning my neck to look into the corners of the frame at all the fascinating details. This is a picture that surely benefits from a BIG screen presentation.

The final shot shows the actual Bruegal in its longtime home at the Kunsthistorisches Museum in Vienna, and there's something both poignant and disturbing about the image. We are suddenly wrenched out of the painting and forced to view it as a mounted and officially sanctified objet d'art. This reinforces my strong feelings that museums are where art goes to die, to suffocate, to be preserved but also sealed off from interaction with the present. Pieter Breughel the Younger was known as a copyist of his father's work; perhaps Majewski's film is a superior "copy" of -- or even an extra-dimensional improvement upon -- the original. 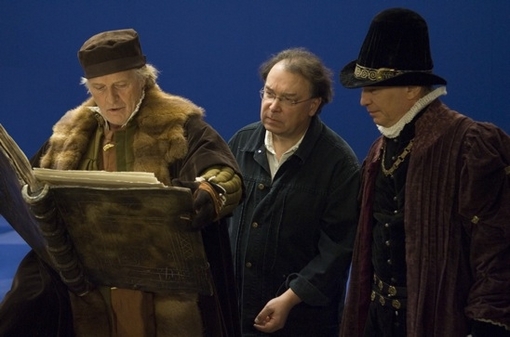 Lech Majewski (from an interview with Alec Meacham in BOMBlog):

I was a supervisor of the work of many talented computer graphic people building all these layers. And in order to recreate the space of Bruegel, because I thought, We are going to meet Bruegel in his own territory, and I have to learn about this territory first. The initial idea was that I would find a landscape similar to Bruegel, with this protruding rock, and I would populate this landscape with 500 characters in costumes. And I will travel among those motionless characters and sort of eavesdrop on their inner thoughts. That was my initial idea.

But when I did the camera tests and I had about a hundred and twenty extras in a similar landscape, and I looked at it later on in the lab, I saw idiotic stuff that had nothing to do with Bruegel. It was just like a postcard, and only about 20 people were recognizable; the rest could be just anybody. What I did then is that I painted over those characters on the reproduction from Kunsthistorisches, and I looked at the space, and I realized that my eyes are starting to swing back and forth, with a certain illusion I don't understand. And we analyzed it with the computer, and we found out that this is not a singular Renaissance perspective that you would imagine from the Renaissance artists. This was actually seven different perspectives combined in one painting. And those stitches, the connecting lines between the various pieces, were hidden behind the groups of people. So only when you remove the people out of there, you realize he's combining seven different sketches, again contradicting each other--one is looking from above, one is looking from below, one from the left, right, center, what have you. But it's a twisted world. Like in geometry, it's not a Euclidean, straightforward space.

And I started to think, Why is that? Obviously the first reason is that he had selected various sketches and combined them together. That obviously was the method he had used. But also, what became clear to me is that his perspective is much closer to our human perspective. Because the perspective of a single point, which is the point of view in the Renaissance perspective, is completely false. It's completely inhuman--it's a dead perspective. It's not a perspective of the human eye, which is in constant movement. First of all, it is stereoscopic--the vision of the world is stereoscopic. So we have two pyramids that actually interfere, one with the other, and produce all sorts of illusions and effects. Second of all, the human eye is very active. It blinks, it changes the focal points, it does it very softly, without your physically noticing, or being conscious that you're changing the focal point. So amorphically, you just observe the world, and your brain is always late behind your eye. And all the neuroscientists, they found out that ten times more information comes down from the brain to the eye than the eye to the brain. So, in other words, you see a preconceived and pre-learned world. You only adjust it with the eye, but your vision of the world is predetermined by the sum of your visual experience, amassed over the years.

What I'm saying is that Bruegel has produced an amorphic space which corresponds with the human acquirement of visual 3D dimensions that are summarized in your head. So you don't have the feeling that--for instance, I'm looking at you and this [pointing] is out of focus. Because at a certain point I look there and I notice it in focus. So this is something that Bruegel was doing. And I realized in order to do that, we really have to slice this painting. If you look at it as a loaf of bread, and the camera is at the tip of this loaf, you have to slice, and each slice has to be dealt differently. So the first slice would be the actors on the blue screens, the main characters. The second slice would be the lesser characters. The third slice would be the background characters. Then it would be the elements of landscape. We were looking for similar landscapes. And then in post-production we were assembling one landscape that doesn't exist.