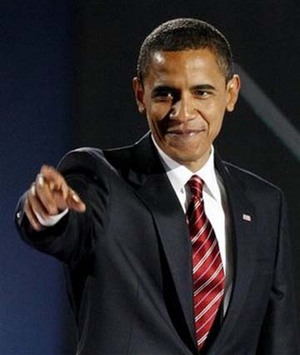 I saw Oliver Stone's "W." a week or two ago, and I almost forgot. Believe me, it felt even more worn out before the election. I kept thinking I'd seen it before in some other form. Not just as in every day for the last eight years, or as in some other slab of Stone. This one reminded me of Woody Allen's "Zelig" or Robert Zemeckis's "Forrest Gump" -- about a nobody who stumbles into history. Then I realized it was more like a reworking of Hal Ashby and Jerzy Kosinski's "Being There" -- the story of a vacancy.

That impression was magnified Tuesday night as I watched Barack step up to fill it. In that one solemn but hopeful election night speech in Grant Park he did more to steady, strengthen and solidify the union for tough times than I've seen any president do in my lifetime. It wasn't just a matter of commanding screen space or being ready for his close-up (although the camera loves him). But after so many years of looking at a skittish hamster-in-the-headlights, squinting or staring blankly into the lens, how dramatic it was to see somebody there at last -- a solid somebody with a firm sense of who he is, and what it means to lead and to strive and to inspire. No smugness, no self-congratulation, no condescension, no desperation. A grown-up. I felt an enormous sense of confidence and relief. And I didn't feel alone in feeling that.

About a week and a century ago, Richard Dreyfuss, who is compellingly corrupt in an unrealistically small role as Mecha-Cheney in "W.," went on "The View" to tell the gals that he thought there was "a character missing from the film." He confessed he felt "W." was "six-eighths of a great film." Math questions aside, what did Dreyfuss mean? (He also said, "You should see my Hitler," and called Stone a "fascist," but tales to that effect from people who've worked with the latter, and watched his films, are banal.)

"The acting is terrific and I think a lot of the writing is good, but I don't really know why Oliver didn't come to a conclusion with it.... I think it's a very good and shockingly empathetic picture of Bush.... but it leaves out us, because we were all terrified of our own president and that terror is our reality. And that character is not in the film, so ... I question whether the film will have any historic legs."

First, for the sake of clarification,"we" weren't "all terrified of our own president." (You can read that several ways: The Decider Divider made sure that if you weren't with him on any given issue, you were against him, and he was not "your" president. And those who did consider him "theirs" sure weren't terrified of him. And "terrified" can encompass many feelings, from disgust to awe -- and in W.'s case the scales were not weighted toward the latter.) 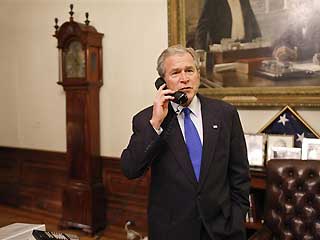 While I think I have some idea of what Dreyfuss was getting at, and share his feeling that the movie will only diminish with time, I don't believe I agree with him in another respect. Both W. and Nixon (the subject of Stone's previous presidential biopic) were isolated figures, who drew the presidency around them like a cocoon, setting themselves apart from the electorate, the law, and the possibility of finding wisdom. (We'll assume that people who are open to it retain that possibility.) "We" are not there, because "we" weren't a consideration. Nobody with such disregard for veracity could feel beholden to an electorate, or acknowledge a reality beyond the tiny bubble of his limited awareness.

Stone seems to gets that W. is an impostor, a puny man who should never have been mistaken for a president, but doesn't know what to do with that idea. (Previously, before I'd seen "W.," I noted that the solidity of presence in Josh Brolin's eyes, even in the trailer, is more than I've ever detected in the real thing; turns out that image is from a nightmare -- a glimpse of repressed humiliation that the waking character can't admit even to himself. To do so would require a moral conscience beyond his capability.)

If "W." is an attempt to draft history, it's a shallow one -- despite, as Dreyfuss says, some fine character work by some of the actors, who don't have much to dig into. It's cartoony, but doesn't have the penetrating dimension of, say, an editorial cartoon because it doesn't have a point of view, much less a "shockingly empathetic" one. The closest it comes is to inadvertently suggest that the title character is not worth making a movie about. A movie about a vacuum needn't be one.