I'm at the Conference on World Affairs in Boulder this week, honored to be continuing the 40-year tradition of the Ebert Cinema Interruptus with "Tinker Tailor Soldier Spy" and participating in panel discussions with some really smart, really swell people from all over the place. This morning I was on a panel about science in movies with Seth Shostak, Sidney Perkowitz and Michael Fink, a member of executive committee of the Visual Effects Branch of the Academy of Motion Picture Arts and Sciences, and one of the key people in charge of the dinosaur sequences in Terence Malick's "The Tree of Life."

So, when we were done with our 10-minute presentations and it was time for the panelists to ask questions amongst themselves before turning the Q&A over to the audience, you know what I had to ask Michael Fink, after the discussions we've had here: Since, as he acknowledged, the CGI dinosaurs are painstakingly created from 0s and 1s and therefore has to be meticulously planned in every detail, what was the intent of the pivotal scene in which the one dinosaur stomped on, and then seemed to caress/stroke, a smaller dino who was lying in a riverbed?

Turns out, Michael was in charge of that very sequence, and discussed it thoroughly, on many occasions, with Malick himself. The premise of the four-shot scene was to depict the birth of consciousness (what some have called the "birth of compassion") -- the first moment in which a living creature made a conscious decision to choose what Michael described as "right from wrong, good from evil." Or, perhaps, a form of altruism over predatory instinct.

Here's the relevant passage from a 2007 draft of Malick's screenplay:

Reptiles emerge from the amphibians, and dinosaurs in turn from the reptiles. Among the dinosaurs we discover the first signs of maternal love, as the creatures learn to care for each other.

Is not love, too, a work of the creation? What should we have been without it? How had things been then?

Silent as a shadow, consciousness has slipped into the world.

Leaving aside the question of whether the science behind this depiction of dinosaur life is sound (or, at least, generally accepted), that is the intention of the scene. Michael said Malick uses CGI footage almost the way he uses photographic footage. He wants a LOT of it to choose from. All in all, they gave him about 50 versions of the scene (out of maybe a hundred that they put together). Michael's initial inclination was to assemble the shots the same way you would if you were shooting it with actors, with the pivotal moment focusing on a close-up of the actor's face, but Malick did not want close-ups of the dinosaurs' eyes -- he wanted it done with the paw (OK, I called it a "paw," but Michael corrected me: it's a foot). 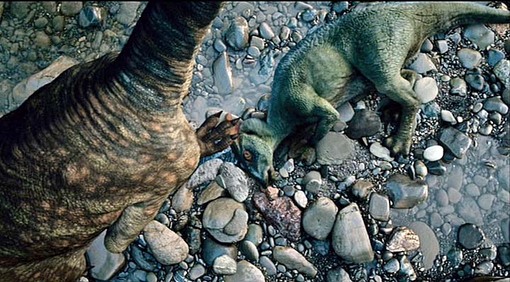 They went back and forth, back and forth, trying to find just the right gestures, and the right timings, for the shots and the movements -- and Michael said he really wanted to keep the moment at the end when the larger creature pauses and looks back for a moment, just before running off. He was glad it made it into the picture.

Michael said he thought the moment was "overacted," but it got the point across, and most viewers seem to understand Malick's intent in the context of the film.

So, there you have it, from the horse's mouth -- er, the dinosaur's director.

Here's the scene, with a bit of context: