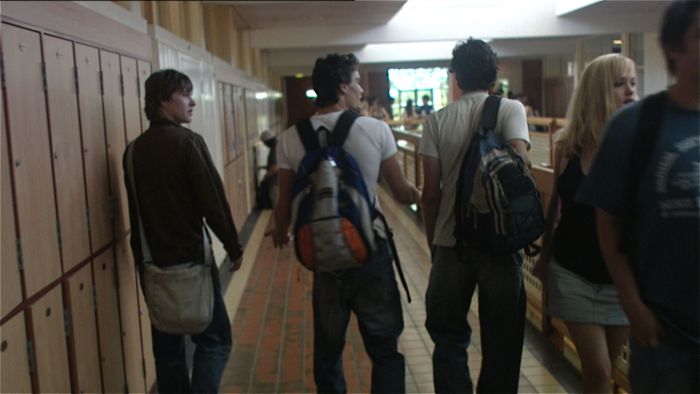 Born out of a suicide (a friend of the filmmaker's) and an attempted suicide (the filmmaker's own), "2:37" is a movie 20-year-old Australian Murali K. Thalluri never intended to write or direct. It just came out that way.

"2:37" is a suicide whodunnit. In the course of one day at school, multiple character perspectives, and a maze of Steadicam shots that virtually trace those in Gus Van Sant's "Elephant," we catch glimpses from the lives of several kids, any one of whom could turn out to the one in a puddle of blood on a restroom floor at 2:37 in the afternoon. (I wonder if the title isn't also a reference to Kubrick's Room 237 in "The Shining," another film drawn with a Steadicam.)

Though they appear to attend a big school, each of these kids feels utterly -- at times disconsolately -- alone. Even when they're surrounded by friends, the bonhomie is forced, superficial. Hey, it's high school. (As a friend said after the screening: "I guess it just shows that Australian high school is as f---ed up as American high school.") Emotions -- big emotions -- pass through like storms on any spring day. And that's part of what Thalluri is getting at: There's a whole catalog of After School Special subjects here (sex, drugs, other physiological and psychological problems) but any one of them, even the most trivial, could be the trigger for a suicide attempt.

The film flows naturally around its central contrivance, employing unforced performances by unprofessional actors and a visual style that uses available light to pull you into the worlds these students inhabit. The black-and-white reality-show style interviews with the kids are unnecessary, and the movie will no doubt be be met with charges of "derivative!" when compared unfavorably to Van Sant's masterpiece. But, even if I hadn't read the press notes (after the screening), I'd still admire the authenticity and unerring behavioral observations of "2:37."