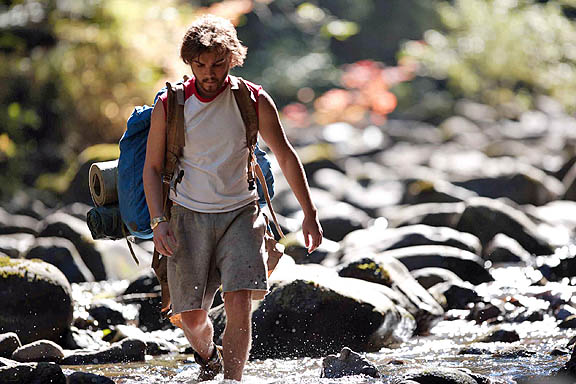 Emile Hirsch as Alexander Supertramp. A star is (re)born.

Ladies and gentleman, writer-director Sean Penn has not ruined the story of Christopher McCandless, aka Alexander Supertramp, in his big-screen adaptation of Jon Krakauer's nonfiction book, "Into the Wild." The movie has awkward patches (is it too late to get rid of the strident Eddie Vedder songs?), devices that just don't work (lose the distracting handwriting from Alex's diary scribbling across the screen), and it leans toward romanticizing what is known about a life that is more ambiguous and mysterious in Krakauer's necessarily fragmentary, journalistic chronicle. 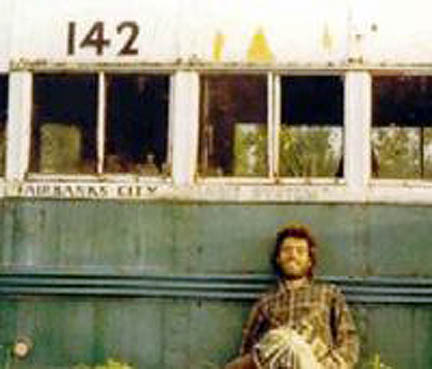 The last known photo of the real Chris McCandless.

But Penn's empathy with his driven hero is unmistakable and deeply felt. Alex (as he renamed and introduced himself to those he met on the road) was a kind of Holy Fool, a young man whose rebellion against his parents' values -- indeed, their very lives -- grew into a wholesale rejection of society and the culture of materialism that he found empty and meaningless. His contempt for the hypocrisy of the world into which he was born transcended the teenage bellyaching of Holden Caulfield. Alex's literary models are Thoreau, Tolstoy and Jack London. Shortly after fulfilling his parents' expectations by graduating from Emory University in 1990, he donated all his savings (about $24,000) and disappeared into the wild, heading west to Colorado and California, south to Mexico, and eventually north to Alaska, as a "leather tramp." Shoe leather, that is.

His journey -- like most quests -- was as relentlessly internal as well as geographical. He was driven, in every sense of the word. Was he running away from something or in search of something, or both? And was that thing, in either case, himself?

Of course, the answers to these questions are unknowable -- as, fundamentally, was Chris/Alex, perhaps to himself and to all who met him. But his idealism, his motivation, his disillusionment and disgust with convention, animated him and sparked a flame in others, who tended to see part of their better selves in him. Penn's adaptation falters when it tries to simplify the character, to suggest answers to questions that, to be honest, must be left open.

The film attempts to draw a direct "through-line" (or, if you prefer, "character arc") from a philosophical youngster who tells an old man that the value of life does not come from human relationships, to a supposedly wiser (but not much older) young man, isolated in the wilderness, writing between the lines in a Russian paperback novel that happiness is meaningless unless it is shared.

By then we already know that some of Alex's happiest moments were when he was alone, and that while he cared for other people, he didn't rely upon them to give his life meaning. (And who says he was primarily interested in finding "happiness," rather than some kind of larger truth or awareness?) I think the movie presents this notion of "shared happiness," in the section captioned "The Getting of Wisdom," as a breakthrough, a moment of enlightenment, rather than simply a moment -- one of many notes to himself Alex left behind. This is not simply a story of Christopher McCandless reinventing himself as Alexander Supertramp, only to better understand and accept his identity as Christopher McCandless again. To see it that way is to mistake fractional evidence for a shapely scenario (think of the case for invading Iraq, SP).

I read Krakauer's book about ten years ago, but I don't recall any evidence to indicate Alex refused to have sex with a girl he befriended because she was underage. Chris/Alex's apparent lack of interest in sex was a mystery to everyone. He seems to have channeled his drive into other areas. At any rate, the way the scene is presented here (girl undresses and presents herself to him on a mattress) doesn't play. It feels like a development presented explicitly to explain or illustrate, to address a particular question about the character rather than to explore it.

Now I realize I've spent four paragraphs about what I don't think works in the film, when I started off by announcing that it I liked it, was moved by it, and that it wasn't the misfire I had feared. I say that not because I had any reason to think it would fail, just that I felt so strongly about the source material that I really, really didn't want to see a disservice done to it. 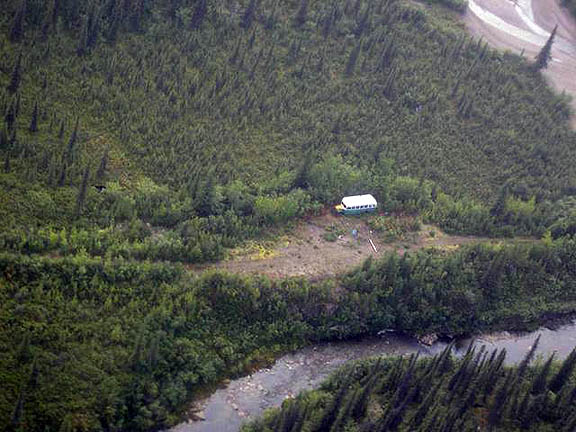 The abandoned bus in the Alaskan wilderness where the real McCandless camped.

Two things immediately impressed me about "Into the Wild":

1) The diversity of the locations so vividly (and often spectacularly) captured by Penn and cinematographer Eric Gautier. Each place registers an emotional and psychological impression. These aren't just landscapes Alex happens to pass through; we seem to be entering them through his experience, and to absorb something from them as he does. Appropriately, the place that seems the least distinctive is the one he left behind, the world of his parents (school, suburbia) that he rejects.

2) The equally vivid, lived-in feel of the performances. Emile Hirsch has never quite registered with me before, but this is a star-making role. He has to hold the entire movie together, while everyone else passes through his life. Hirsch may now be where Leonardo DiCaprio was around the time of "What's Eating Gilbert Grape" and "The Basketball Diaries." The movie goes right to the verge of making Alex/Chris too saintly, but Hirsch suggests the naivete and self-possession/selfishness of a young man who, perhaps, can't accept love and doesn't know quite how to express it. But he does recognize its expression in others. 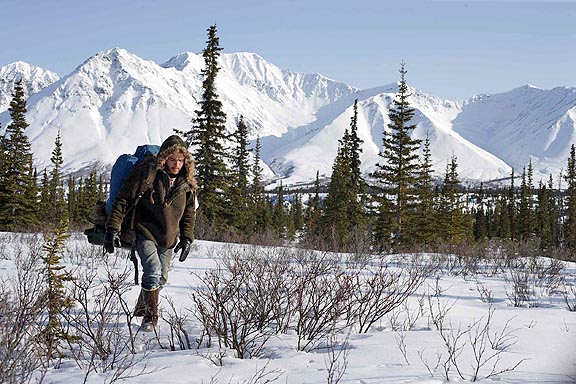 North to Alaska, deeper into Denali.

From the moment Brian Dierker appears, I figured he was either a great actor or not an actor at all. Turns out this is his first screen credit, and he's a veteran Grand Canyon river guide. Penn must have recognized the real thing when he saw it. As Rainey, one of the "rubber tramps" (on tires, in an RV) who picks up Alex, he's startlingly authentic, an old hippie who's learning that life isn't what he's thought it was, or would be. This is one of those rare nonprofessional turns that is so real, so lived-in, that it deserves recognition -- even if the guy isn't "acting." He's absolutely genuine in his own skin. Many professionals would give their eye teeth to achieve this level of authenticity on the screen.

Of course, Catherine Keener, as his old lady, is one of the few pros who can match this level of unforced naturalness, and her scenes with Dierker are heartbreaking. She is the emotional center of the movie: Alex is the son she lost, and she's the mother he wishes he had had. They both recognize this bond subconsciously from the moment they meet, and it's as if they've each found a missing part of each other.

Alex is blessed with a series of influential, much-needed father figures. In addition to Rainey, there's Vince Vaughn (funny and poignant) as a factory farmer, and Hal Holbrook (eloquent beyond words) as a widowered leather-worker. It seems trite to mention Hollywood awards in the face of such affecting work, but when the Screen Actors Guild nominates their "best ensemble cast," everybody here deserves to be in the running.