"I've seen a lot of good shit and a lot of bad shit but not a lot of meh." 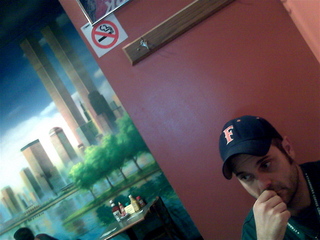 Old man on a bench, speaking to a wire construction fence, or possibly a pigeon on the other side of it. Or maybe a Bluetooth headset: "But the best picture Judy Garland ever made was..." (Just then, a loud truck roared past, in the opposite direction from the one I was heading, and drowned out the title. I hesitated, almost went back to ask, but I was hustling to get to a screening. I'm kind of hoping it was "Meet Me in St. Louis.")

"Dude, I keep seeing you out of my peripheral vision and thinking you're that guy from 'MythBusters.'" (This was said directly to me.)

Anybody seen the guy who wears his sunglasses on his head during screenings and writes with a blue light pen, casting a glow as if he's using a laptop during the movie? Please thwack him if you get a chance. I couldn't reach him from where I was sitting.

"Well, everybody seems to like [Danny Boyle's] 'Slumdog Millionaire.' It's got all the elements: 'Juno,' 'Little Miss Sunshine'... At least they hope it does."

"'JCVD' [the Jean-Claude Van Damme "meta-action movie" parody] is really fun. It's better than a lot of the movies I saw at Cannes!"

Why does the thermostat in my hotel room show the temperature in Fahrenheit when all other Canadian thermometers use Celsius? I do not know. 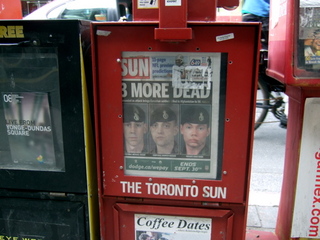 Photo at right: One difference between Canadians and Americans: How they honor their military veterans and casualties. They don't hide their coffins. They acknowledge their faces and their sacrifices -- even on the front page of tabloid newspapers. These three soldiers were killed in Afghanistan last week.

Matt Damon doesn't have a big movie in this Toronto festival -- but he does have a Spanish-speaking cameo in Steven Soderbergh's "Che." Nevertheless, he made news among the festival crowd with his remarks about Sarah Palin in this interview with the AP:

"It's like a really bad Disney movie -- the hockey mom...from Alaska, and she's the president, and it's like she's facing down Vladimir Putin and using the folksy stuff she learned at the hockey rink. And it's absurd, it's totally absurd, and I don't understand why people aren't talking about how absurd it is," Damon said.

"You do the actuary tables, there's a 1-3 chance if not more, that McCain doesn't survive his first term and it will be President Palin," Damon also said...

One difference between Canadians and Europeans: They are not into power-tripping you at the entrance to movie theaters. I arrived too late (about ten minutes before starting time) for the one and only press/industry screening of Kathryn Bigelow's "The Hurt Locker" yesterday. About a dozen of us crowded into the space between two sets of glass doors at the Cumberland, waiting to find out if there were any empty seats in the auditorium upstairs. Ushers radioed that they had found six seats. Six people went in. Then word came that no more seats could be found.

Some of us (the Americans and Canadians) were saddened and disappointed and frustrated. Others (those with European accents, though it is possible they were Quebecois) were indignant. They waved their passes and accused the theater staff of ignoring them or cheating them in some way. (One Frenchwoman said she'd already been in the theater and had just come out for a cigarette. No, the staffer politely explained, if you had been inside you would have a yellow ticket so that you could get back in. You do not have a yellow ticket. Therefore, you were not inside.)

Finally, a staffer had to explain: There. Were. No. More. Seats. She was not trying to screw people out of seeing the Kathryn Bigelow movie. She was not attempting to wield arbitrary authority over a gaggle of eager festivalgoers in order to make herself feel powerful and important. She was doing her job and telling the truth: The theater was full. After about 10 or 15 minutes, the disbelievers dispersed.

Observed a Canadian to an American as they walked away to catch some other screening instead: "Jeez, those people must have learned their manners at Cannes."

(No, I've never been to Cannes. But everybody who has tells stories about the Vichy branch of the Gestapo at the Palais des Festivals...) 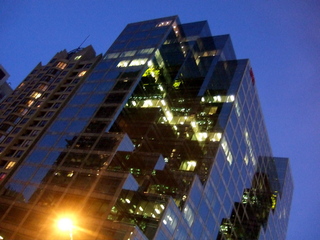 A Cronenbergian frame grab: While walking back to the hotel one evening, I looked up and saw this (right), which confirmed the obvious: Toronto is David Cronenberg territory. For a moment I felt I was looking at an establishing shot from, oh, "Scanners" or "Crash" (1997) or "The Fly" or maybe even "They Came from Within / Shivers")...

From Glenn Kenny's post, "September 11, 2001 at the Toronto International Film Festival: A reminiscence":

It's odd. To be perfectly blunt, I would have been happy to spend September 11 of every year until the day I died in Toronto, for reasons that are both complicated and, I will insist, not unpatriotic. I'm not in Toronto now because the trip there just wouldn't have made sense in my current situation--just got back from another trip, too much work at home, and so on--and that's the way it goes. But Toronto has a special place in my heart, or perhaps to be less soppy I should say my consciousness, on account of having been there on September 11, 2001, and many days after that.

Re: Top photo. Dave is not posing pensively. He didn't know I was going to take a picture with my phone. And until I showed him the picture he didn't realize what was on the far wall behind him.