What a sweet little movie "The Wrestler" is.

This may be the first time adjectives like these have been applied to the work of Darren Aronofsky ("Pi," "Requiem for a Dream," "The Fountain") or Mickey Rourke ("Johnny Handsome," "Sin City"), neither of whom has an on-screen reputation as Mr. Charming. But there's not a mean or cynical (broken) bone in this movie's soft-bellied, soft-hearted, battle-scarred, age-tenderized old body. 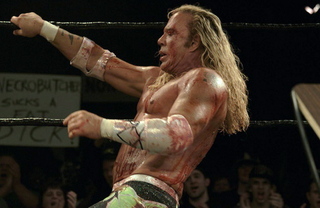 Tell me if you've seen this one before: Rourke is Randy "The Ram" Robinson, a good-guy wrestler with long, bleached-blond tresses and fat fingernails that look like worn-down turtle claws. Randy used to be a big draw, back in the eighties heyday of, say, Hulk Hogan. Today, he looks like David Lee Roth on steroids. And by that I mean pretty much exactly like David Lee Roth on steroids. All these years later, Randy's still performing the same old tricks, but now to significantly smaller and older crowds, in school gymnasiums and American Legion halls. He's a bundle of maple-glazed ham -- rock-hard, 'roid-pumped biceps and pulverized hide -- and he's wondering how much longer his endlessly pummeled anatomy can take the abuse of bouncing, crunching, smashing and flopping around the ring.

For subplots, Randy feels guilty about neglecting his estranged daughter Stephanie (Evan Rachel Wood). And he imagines he has more than a paying-customer relationship with a big-hearted, past-her-prime stripper named Cassidy (Marisa Tomei).

It all takes place in a wintry, low-rent New Jersey landscape of trailer parks and aluminum storm doors, set to a hilariously cheesy '80s hair-metal soundtrack (except for the Springsteen title track over the end credits).

Yes, it would be easy to imagine "The Wrestler" playing on the Hallmark Channel. All they'd have to do is letterbox it, bleep some words and pixellate some nipples. You might have liked it better when it was called... "Tender Mercies," or "Atlantic City" or [your title here]. But it's a very nice little movie. Did it deserve to win the top prize at the Venice Film Festival a few days ago? I don't know. What else played at the Venice Film Festival this year?

There's no question about this, though: "The Wrestler" is a likeable showcase for Rourke, who has never been more winning. Even in his star-making role as Boogie, the smooth operator in "Diner," he oozed smarm like gravy on fries. Not Randy, though. The guy is smart and sincere, and his gentle smile isn't that of a dazed dope who's been clobbered in the head too many times. It's the smile of a modest man who works out all his aggressions (choreographed though they may be) in the ring. All he wants is not to be hated, and the same could be said of "The Wrestler."

UPDATE: At the suggestion of some readers, I struck the reference to "choreographed" in the previous paragraph because the word implies much more planning (and rehearsing) than the wrestlers in the movie -- and, apparently, elsewhere -- actually do. In the film, the wrestlers simply exchange a few words in the locker room about what they want to do, and then improvise around them.