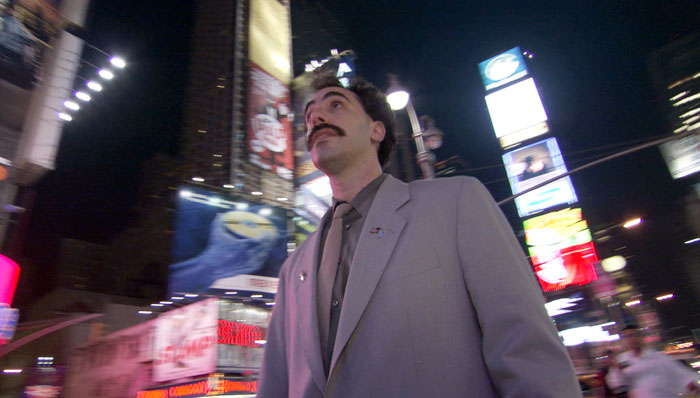 Borat in New York, a town locate on the eastern coast of United States and America.

In their reviews of "Borat: Cultural Learnings of America for Make Benefit Glorious Nation of Kazakhstan" Anthony Lane of The New Yorker and Armond White of the New York Press make it clear they are not amused. Mostly because they think the movie is about something I woudn't think was funny, either, if I thought that's what the movie was about.

To Lane, Sacha Baron Cohen is a guy who "adopts fictional personae and then marches briskly into the real world with a mission to embarrass its inhabitants." That may be "Punk'd" (or "Candid Camera") but that's the least of what's going on in "Borat," which presents these improvisations in a fictional narrative context that give them meaning (and, consequently, humor). To White, "Borat" is "anti-American propaganda," that "primarily consists of genital humor, scatological humor and jokes about deformity and mental retardation" -- while any praise of the film is "a bit seditious" and amounts to "evil criticism." OK, that movie doesn't sound funny to me, either. But that movie is nine shots of Armond White with just a splash of Borat Sagdiyev.

Both Lane and White insist that the "real people" Borat encounters are uniformly the "victims" of his humor. And yet, we probably ought to remember that all of them would have had to sign releases, or contracts, to appear in the film. (One guy who runs away from Borat on the streets of Manhattan has his face digitally blotted out in the TV spots, probably because his release did not cover the use of his likeness in advertising.) I don't know to what extent each of these scenes was staged and which involved actors. But (he said "but"!) "Borat" pretty much requires that you ask yourself who is the butt of the joke (if there is one -- a joke or a butt) in each case. Is the driving instructor a "victim" (or a target) in the same sense as the drunken frat boys? Are the kids who run from the bear treated the same as the etiquette coach? Is Alan Keyes in on the joke to the same extent as Pamela Anderson -- and is it the same joke? If you don't ask yourself these kinds of questions while watching "Borat," a movie that provokes you again and again to examine your reaction to what you're seeing and ask why you think it's funny (or not funny), then you may as well be watching "Punk'd" or Martin Short's Jiminy Glick -- because you won't understand the difference.

In Borat’s interview scenes, the "Candid Camera" gimmick recalls old confrontational hoodwinks, like the one Martin Short perfected by playing showbiz sycophant Jiminy Glick. But Short’s Glick was brilliantly ballsy; he went after celebrities—the real sacrosanct power in contemporary culture. Borat picks on a trio of middle-aged feminists trying to hold on to dignity. The joke is on their age and politeness. “Do you know the word ‘demeaning’?" one of them asks. Borat answers “No—the same negation he directs toward an etiquette club’s dinner party, a gang of ghetto rap boys, Pamela Anderson fans, any group that might be perceived as voting conservative.

Advertisement
First, White is correct when he asserts that Jiminy Glick is not really much like Borat when you think about it, if you think about it, even though he makes that assertion after he's made the comparison. Glick is one big, self-congratulatory "Access Hollywood" inside-showbiz gag, where all the guest interviewees are fully aware that they are sitting opposite Martin Short. Is there an easier target -- or a more pervasive one -- than the inanity of celeb chatter? If White honestly thinks celebrities are "the real sacrosanct power in contemporary culture," or that Jiminy Glick does more to undermine it than to simply reinforce it, then I hate to say it but he needs to watch more TV and check out more check-stand tabloid papers and magazines to get a little perspective on the place of celebs in contemporary culture.

Second, White assumes that the interview with "a trio of middle-aged feminists" is a joke "on their age and politeness." Really? He doesn't notice that the women (who occasionally look like they're about to laugh) maintain their dignity and politely humor Borat, while he does his best to shock them by saying the most cretinous things imaginable? Imagine if these women had taken the bait and thrown a screaming fit. I submit that would not have made for a funny scene, just an ugly one. Borat's oversized, inappropriate jibes are in the anarchic spirit of Groucho Marx insulting Margaret Dumont (although his lines aren't nearly as clever, because he's not playing a clever character). Both White and Lane get Borat's comedic precedents all wrong. (Are Chico and Harpo evil, too?)

In his second paragraph, White writes: "As Borat Sagdiyev, Cohen pretends to document the habits of fly-over America; his red state debauch ultimately pandering to Liberals’ worst instincts." He lumps together the "trio of middle-aged feminists" with "an etiquette club’s dinner party, a gang of ghetto rap boys, Pamela Anderson fans, any group that might be perceived as voting conservative." What makes White assume all these "groups" he's describing might be perceived as voting conservative? Middle-aged feminists and Pamela Anderson fans? Southern aristocrats in a mansion on or near Secession Blvd. and "ghetto rap boys"? Does he honestly think the film has the same attitude toward them all? (White thinks the movie too afraid to poke fun at "N.Y./L.A. media-centers" and exploits cultural confusion to divisive ends; I think Borat's a social-liberal populist disguised behind a giant moustache, who shrewdly identifies with blacks and gays because he doesn't want to risk causing truly divisive offense. )

There is none so provincial as a patronizing New Yorker who's spent too long in his solipsistic media-center bubble. White claims "Talladega Nights" was "derisive about the Midwest’s auto-racing subculture" (but at least he thought it was funny, though he doesn't mention it co-starring Sacha Baron Cohen); Lane writes, "This defense of Borat as an unwitting scourge of the reactionary—unearthing Midwestern beliefs no less parochial than those he left behind in Kazakhstan—is sound as far as it goes." No acknowledgment that, after a brief Kazakhstan introduction, the whole second section of the movie takes place in New York City, and the last act in Los Angeles and Orange County. Borat's route goes from New York through Washington, D.C., then into the South, and through Texas and the Southwest on the way to the Pacific coast. But to these guys, anything west of Jersey is "The Midwest." Borat's not that insulting.

What does Baron Cohen’s cousin, an expert in autism, make of all the retard jokes? And what game is Baron Cohen playing, exactly, when he shows mock footage of an annual Kazakh ceremony known as “the Running of the Jew," in which children kick a giant egg to bits, to stop “the Jew chick" from being hatched?

Well, I don't know the answer to the first question, but I'd rather know what Lane makes of them. In one scene a "humor coach" explains exactly why jokes about "retardation" are not considered funny in America, because mental illness causes a lot of pain to a lot of people. Borat is clueless: "Even if it's a very funny retardation?" Is that joke really at the expense of the mentally ill -- or the humor coach? Later, Borat misunderstands a Southern gentleman who says he's "retired." To Lane, these are just "retard jokes."

As for the "Running of the Jew": What part of this requires explanation? The visuals alone -- the preposterous magnitude of the exaggerations -- are what's so hilarious. The notion that the culture perpetuates these caricatures of such mythic proportions, and indoctrinates children into participating in them (even though none of them, especially Borat, have ever actually encountered a real Jew) is what makes it satire. That this isn't immediately apparent to an adult writing for a "sophisticated" publication like The New Yorker is something I find troubling. And I don't think the fault is with the movie.

Then again, perhaps Lane and White should not be expected to understand what's going on in "Borat." After all, White proclaims: "Borat is not funny—except, perhaps, to 13-year-olds or people who imagine Cohen’s targets (that is, other Americans) as mortal enemies." White is writing to get attention, but is it really all that far from this kind of divisive shock-rhetoric to the mentality behind "You're either with us or with the terrorists" -- or to Ann Coulter, or to the Running of the Jew? Or am I just an American-hating 13-year-old? (Rhetorical question!) And are those the only two options?

My review of "Borat" is here.