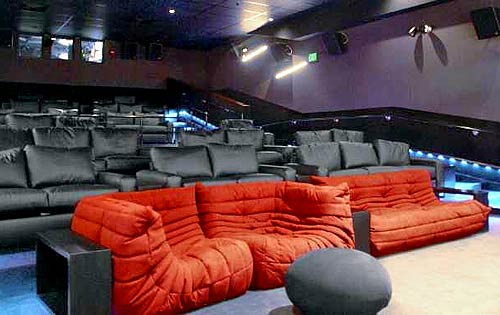 If only the "theatrical experience" could be as good as your living room...

An architecture critic for the Los Angeles Times reviews the new Landmark multiplex at the Westside Pavilion:

... [It is] designed to compete directly with your living room — with your sofa, your flat screen and your ability to pause, rewind, turn on the lights or just give up on the movie idea altogether and switch over to "The Daily Show."

As if to acknowledge how tough it's becoming to drag people out of their houses for a night at the movies, with home-theater technology getting better and traffic getting worse, the Landmark includes a number of domestic architectural touches. The most striking are three "Living Room" theaters on the top floor that hold between 30 and 50 people each. They include sofas and side tables as well as overstuffed love seats and ottomans by the high-end French furniture company Ligne Roset. [...]

All of the Landmark's larger auditoriums are pleasingly steep and feature extra-wide seats with cup holders that will accommodate your Chardonnay as well as a Big Gulp-sized soda. They are served by top-of-the-line Sony digital projectors, which construction crews were moving carefully into place last week.

But those rooms offer a variation on an architectural experience we all know well: the big movie auditorium with cushy seats and teeth-rattling sound. What's new at the Landmark, at least for a first-run theater, are those Living Rooms — not just for their furniture but for what they reveal about the industry's attitude toward architectural space in a digital era. [...]

This time around Hollywood is openly admitting the extent to which the public now associates the movie-watching experience with the comforts of home.

Well, why should a theater be less comfortable or less aesthetically satisfying than your average big-screen TV home set-up? This kind of thing has been done for years (the beanbags or sofas and ottomans in the front row and such), but what I'll be interested in seeing is whether cozy 30- to 50-seat auditoria can bring in enough revenue to justify building them.