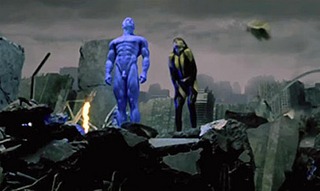 But I just had to look, Having read the book... -- John Lennon

Really, I just wanted to point out that a glowing blue naked guy is the hero of one of the most anticipated mainstream movies in years. Did you know that? Seriously, though, I do have a dilemma: "Watchmen" opens March 6. I read the compiled comic book series by Alan Moore and Dave Gibbons back in the early 1990s, I think -- just around the time Terry Gilliam was attached to make the movie version. Here's the poser: Having read the book so long ago I've forgotten it, should I read it again before seeing the movie?

"Watchmen" is something many fans know practically by heart. I know one who attended an early screening of the movie and said it was one of the best adaptations he'd ever seen. An already notorious Nerd World post by "Simpsons" executive producer Matt Selman ("My Own Private Watchmen") broke the review embargo by proclaiming that he didn't consider himself "press" and wasn't actually reviewing the movie, but couldn't control the 14-year-old still living inside him: "Someone took the most special personal thing of my adolescence and put it on a movie screen."

What will people who've never read "Watchmen" even think of this film? What will it be like for them to sit through these crazy, violent, colorful three hours and not recognize almost every line - almost every image? Will they be utterly baffled, bored, or totally love it? Is "Watchmen" even a good or bad movie? I have no idea.

My standard operating procedure over many years as a movie critic has been to keep the movie experience as separate from the source material as possible -- at least on first viewing. Otherwise it can be hard to tell what the movie is doing and what you're bringing to it from earlier impressions.

If I've already encountered a pre-existing version of the "property," then so be it. I can't go back and un-experience it. Either way, I can't judge the adaptation But I usually like to see the movie fresh, and do any research I feel compelled to do afterwards. Then, perhaps, I'll re-visit the movie, Knowing What I Know Now.

I wrote about this a bit after seeing "Revolutionary Road," a novel I loved but hadn't read for 20 years or more. I knew the movie wasn't getting it, but I wasn't sure why until I went back and re-acquainted myself with the book. On the other hand, I knew exactly what I didn't like about Tim Burton's "Sweeney Todd" because I knew the music well, had seen several productions over the years, and thought the movie was missing almost everything that made Sondheim's work great.

I have vivid memories of seeing a press screening of Stanley Kubrick's "The Shining" in 1980, having read Stephen King's novel in paperback a year or two previously. That experience taught me a lesson: reading the book can actually distract you from seeing the movie clearly. Sometimes you have to see the movie once just to clear your mind of preconceptions. After that, you may actually be able to see the movie.

In the case of "Million Dollar Baby," I saw the movie first, kinda liked it (though I felt I was wanting to feel it more strongly than I actually was), and then heard the late F.X. Toole, the author of the stories from which the movie was adapted, in a four-year-old rebroadcast interview on the radio. Hearing Toole read from his own stories and talk about his work as a "cut man" -- then reading the stories "MDB" was based on, was like getting punched in the head. The movie seemed sterile and bloodless in comparison. As I wrote at the time, what's best about the movie is what's truest to Toole. Its failures are mostly sins of adaptation. This was when I first discovered a name that I would come to dread seeing on a movie screen: Paul Haggis.

So, I'm sitting here with my old copy of "Watchmen" at my side. I remember virtually nothing about it except that I enjoyed reading it -- which says more about my memory than anything else. I didn't even remember there was a blue naked guy in it. All I know for sure was that some of it was set in some kind of alternative past, there were some superheroes in it, some smiley faces, and archival documents between chapters. Will I appreciate the movie more if I have the comics (OK, graphic novel -- in the serialized Dickensian sense) fresh in my mind? Or should I let the movie take me by surprise (assuming I don't remember things right before they occur, as often happens to me with tales I think I've forgotten)? What would you do?