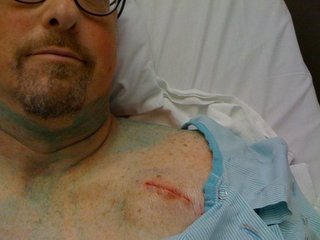 I took this photo of my Cronenbergian incision Friday night after I had a biventricular ICD installed to help me with various arrhythmias I've had for years, and the congestive heart failure that flatlined me back in 2000. Now I am bionic. The image brings to mind so many movies (looks a little like a smiling third nipple in this particular shot -- the swelling has since gone way down). But it reminds me most of the talking boil that sprouts on Richard E. Grant's neck in Bruce Robinson's insanely great "How to Get Ahead in Advertising" (1989), equally brilliant follow-up to the modern comedy classic "Withnail and I." I'll let you know if it starts bossing me around...

Next Article: The tail of the banana-eating jungle monkey Previous Article: On the devaluation of monsters... and movies

The tail of the banana-eating jungle monkey

On the devaluation of monsters... and movies