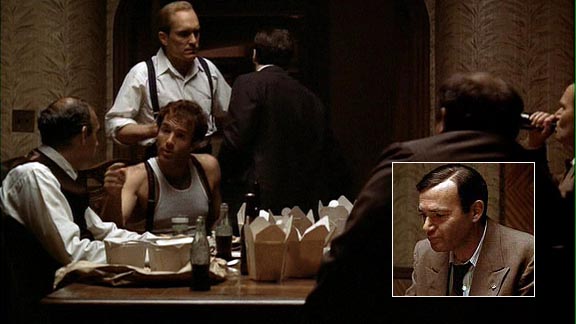 A family meeting: Who is that sixth man (on the far right)? Hint: It's not Kevin Spacey.

Longtime Scanners commenter and Ebert correspondent Ali Arikan, in Istanbul (one of my favorite cities), solves the mystery of The Sixth Man in "The Godfather" (or "One," as they say in the Sopranos family) and "The Godfather, Part II" in Roger Ebert's latest Answer Man column. The unidentified man in question is present during the meeting in which the Corleones plan the killing of a New York police captain. And his name is...

... Rocco Lampone... [whom you may remember from] the earlier scene in the film where Rocco executes Paulie in the car as Clemenza urinates outside (the “leave the gun, take the cannoli” scene).

... He eventually becomes one of Michael’s two caporegimes (Al Neri is the other one). Incidentally, it is Rocco who, in the second film, assassinates Hyman Roth at the airport, only to be shot in the back by a police officer as he tries to flee the scene.

Next Article: Gimme them old-time furrin pictures Previous Article: Is it anti-American to like non-English movies?