The Signal: What to do (and not to do) when the world ends 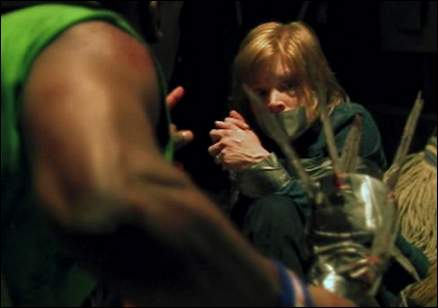 Duct tape: Effective in an emergency or no?

My review of "The Signal" is at RogerEbert.com. Here's an excerpt:

A few things we can learn from the experimental horror-comedy "The Signal":

1. Do not live in a place called "Terminus." There's no future in it.

2. If your cable goes out, don't stare at the mesmerizing static, just turn off the TV.

3. Do not put on headphones and listen to music while strolling down the corridor in your apartment building if it's strewn with freshly slaughtered corpses, especially if madmen with garden shears are also present.

4. It doesn't hurt to wear a tinfoil hat sometimes.

That first one is a given. The second one you should already know from life experience and from movies like "Videodrome" and the Japanese horror film "Ringu" ("The Ring"). The third one you should know from every zombie or slasher movie ever made, and besides it's common sense. And the fourth, well, that's just a bonus tip that could come in handy someday.

Written and directed in three segments, or "transmissions," by David Bruckner, Jacob Gentry and Dan Bush, respectively, "The Signal" originated as an experiment called "Exquisite Corpse," in which a story is passed along from one filmmaker to another, each taking it in new directions before handing it off to the next. The result is a movie that explores the common ground between visceral horror and sketch comedy, and finds plenty of it. Both forms share a zest for the outlandish in logic and execution, which is probably why the frightening and the laughable bleed together so readily.