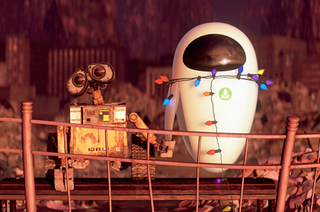 When kids tell you about movies, they almost always take care to warn you about the scary parts. Everybody seems to go through at least one phase where the scary parts are just too much and the only solution is to flee the theater or switch to something else on the TV.

I understand. I'm going through one of those phases right now, and the movies that scare me the most are designed for kids. The first time I tried to watch "Wall-E" on Blu-ray (which was also the first time I'd seen the movie), I could barely handle it when the big rocketship nearly landed on WALL-E and he trembled in fear. He didn't know what was going on! Not long afterwards I had to turn it off when EVE shut down (in accordance with her "directive") because it was just too sad. I was feeling too much. For animated robots. Pathetic.

Right now, for personal reasons, I'm exceptionally sensitive to the pain and suffering of non-human creatures, even if they're just representations made out of pixels. I've never finished watching "Finding Nemo" because the sound of panic in Albert Brooks's voice when papa clownfish Marlin is separated from his boyfish Nemo was more than I could handle at the time. (Curse you, Andrew Stanton!) Then again, that was five years ago, when I was younger and more impressionable.

The traumatization, disappearance and death of the simple and guileless are a staple of hour-long TV crime shows (which I don't watch, but I know they're there) and movies, but those are usually crime melodramas about missing persons. The threat to the naive character is the very premise of the thing... but you could say the same about "Finding Nemo." Shouldn't I be more upset by the dramatization of perils to photorealistic images of human actors? I have some possible answers, but first I'd like to hear your theories. What do you think? Or, rather, how do you feel?