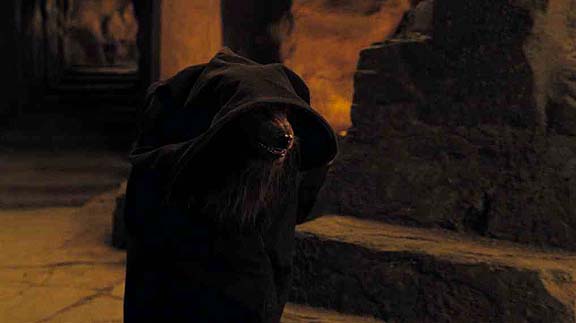 Lesson for the kiddies: Don't take Turkish Delight from an icy Tilda Swinton and don't be fooled into thinking this seemingly innocent underground-dwelling creature has your best interests at heart. Got that?

My review of "The Chronicles of Narnia: Prince Caspian" is at RogerEbert.com. Here's an excerpt:

... Character is not destiny in the "Narnia" pictures. Destiny is. Which creates some moral and dramatic dilemmas for the viewer. With all the dramatis personae Lewis has crammed into his filagreed fantasies, few of the players have the opportunity to leave much of an impression, or acquire significance, beyond what the tale demands of them. (Who's that badger again?) They do what is asked of them -- in the story and by the story. And once we realize that even the leads are predestined to play their parts in fulfilling prophecies, and that all they have to do to meet the requirements is to abide by (or guess) whatever certain mystical authority figures want them to do, the tension deflates a bit.

The moral options, as set forth in the movies so far, are fairly clear-cut: believe the beautiful lion and the friendly beavers; don't trust the sepulchral ice queen bearing Turkish Delight or the hideous dark demons extolling the forces of hate. What could be simpler? A child could do it. And what kind of lesson does that communicate to the child who can? That it's easy to tell right from wrong? Not a wise maxim.

What responsibilities do the Sons of Adam and Daughters of Eve (how does that work?) bear for their own decisions, and the consequences of their actions, if everything can eventually be set right by some deus ex machina -- the healing properties of supernatural potions, or the corrective powers of magic lion's breath? What becomes of free will, of meaning itself?