The Ghost Writer: Polanski was here

The prow of the ferry in the first couple shots of Roman Polanski's "The Ghost Writer" isn't like any I've seen before. It raises up, like the visor on the headpiece of a suit of armor (or the crusher arm on a garbage truck), to let the cars on and off. It's just a little bit... odd, the sort of detail you'd expect Polanski would include -- not necessarily unsettling on its own but somehow menacing when seen through the lens of Roman Polanski. Moments later, the vehicles begin to disembark, with the exception of a car in near the front of the center lane that blocks traffic, creates a nuisance, and imparts dread. There's nobody in it. So, where did the driver go?

A few scenes later, a private plane lands at a small airport and we're given a shot of the fuselage framed around the (closed) door on the left and the first two windows on the right. Cut to a reverse angle of people waiting on the tarmac, and then back to the same basic configuration. The door pops open and it's one of those kind with the hinge on the bottom that folds down into a little set of stairs. The motion of the mechanism visually echoes the prow of the ferry. But there's something else in this shot that will come back to haunt us: the company name Hatherton, meant to recall Halliburton. It's just there, and it pops up in other shots throughout the movie, but it doesn't quite click into place until a Google search that hyperlinks pieces of various characters' pasts late in the film.

Again, no big deal. That's just one tiny piece of the mystery (which, if you're familiar with the evidence of real-life war crimes by George W. Bush, Dick Cheney and Tony Blair, turns out to be not that much of a mystery after all -- the crimes hinted at in the movie pale in comparison). But somebody put it there for you to notice, and the repetition of the aforementioned image of the side of the plane scratches at your awareness like a tick crawling on your neck. This is a Polanski thriller, which means it's sleek and sinister and every shot matters. If you ever ask yourself why you're looking at a particular image, you can be fairly confident you'll discover there's a good reason.

"The Ghost Writer" is not as crazy as "Frantic" (1988) -- a criminally underrated, North by Northwesterly paranoid chase movie -- but it's likewise loaded with off-kilter Polanski touches: the landscaper with the Sisyphean job, the dead man's slippers under the bed (shades of "The Tenant"), trying to ride a bike over gravel, the awkward consequences of trying to get away with doing something you know you shouldn't be doing, the intrusion at bath time, the jagged shards of repressed emotion that you didn't see coming...

The auditorium in which I saw it (Lincoln Square Cinemas in Bellevue, WA) was apparently using a nightlight for a projector lamp, so on my way out I checked one of the other theaters to see if it was any brighter. It was -- a bit. But I also noticed that this audience was getting the humor a lot better than the crowd with whom I'd just seen the picture. I almost stayed to re-watch it with this second group. They were more fun.

The story is based on a best-selling novel called "The Ghost" by Robert Harris, and the screenplay is credited to Harris and Polanski. (That's "and," not "&," which most likely means they did not work together. Harris wrote a screenplay and Polanski re-wrote it enough to get screen credit.) A ghost writer (Ewan McGregor) is hired to re-write the memoir of a former British Prime Minister (Pierce Brosnan -- fantastic performance!) who is accused of war crimes.

But enough with all the plot details. At least half the plot probably doesn't make any sense, anyway (like some of Hitchcock's plots), but the movie is so lithe it scarcely matters. (I don't know what the deal with the passed note is, either, but it sure makes for a nifty suspense shot.) Now I'm going to say something about the ending, so BEWARE OF SPOILERS. 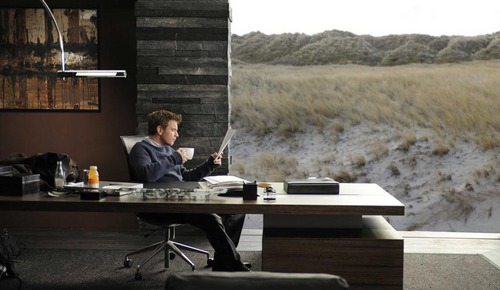 As I sat there grinning at the final image (because this was the inevitable absurdist conclusion you just knew Polanski was shooting for) a guy behind me exclaimed: "That's it? That's the end?!" It sure is, and though you may not like it in story terms, formally and thematically it's exactly where it had to end. A few seconds into the shot, before anything really happens, you know that this is it (that's when I felt the smile spreading across my face) -- and not because, as in previous decades, you could see the emulsion thicken and the texture of the image flatten a bit because the end credits were soon to roll.

No, it's because we've been here before, in this very spot, on the sidewalk outside the book publisher's offices at the beginning of the film. [Shortly after the "ghost" got his assignment and left these offices,] two men on a motorcycle mugged him and stole a manuscript from him at the beginning of the film. Since then -- since the moment he took ghosting assignment -- he has been stalked by strange black cars. So, when we return to this place, and he exits the building again with a manuscript in his hand... we should sense the impending inevitable. It's a through street, but it's a cul-de-sac, and coming back here is as necessary as getting Jake Gittes back into Chinatown, or hearing the tenant's final scream...