The fine art of magical thinking 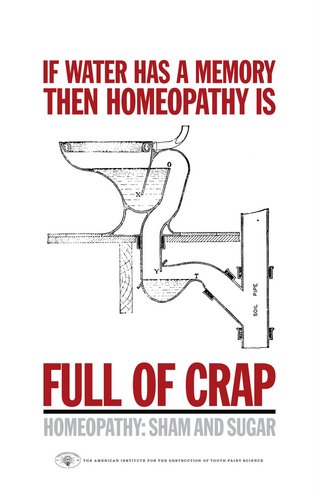 A tangential follow-up to the recent discussion, "Rehearsing your own prejudices," from the Institute for the Destruction of Tooth Fairy Science, via Hell's News Stand (which also has the R-rated version).

A drop of diluted background (from Wikipedia) on homeopathy -- a little dab'll do ya:

... Homeopathic remedies are usually diluted to the point where there are no molecules from the original solution left in a dose of the final remedy. Since even the longest-lived noncovalent structures in liquid water at room temperature are only stable for a few picoseconds, critics have concluded that any effect that might have been present from the original substance can no longer exist. No evidence of stable clusters of water molecules was found when homeopathic remedies were studied using NMR.

Furthermore, since water will have been in contact with millions of different substances throughout its history, critics point out that any glass of water is therefore an extreme dilution of almost any conceivable substance, and so by drinking water one would, according to homeopathic principles, receive treatment for every imaginable condition.

P.S. As we all know, homeopathy only works when making dry martinis. You allow one ray of light to shine through the bottle of vermouth into the bottle of gin before pouring the latter.