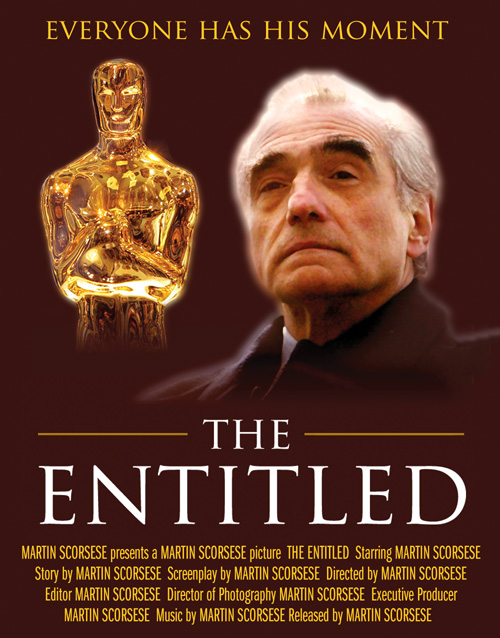 "I've been making pictures for 40 years," said the intense, fast-talking Scorsese in an excerpt from "The Entitled," during which the Rolling Stones' "Gimme Shelter" can be heard in the background. "For 40 years, I've been making pictures. And I've always been fascinated with the struggles a man must endure when people don't appreciate him. People say I'm the best. I didn't say it, they did. I just do my work. But for years they've been talking and you know it. You do. I deserve that award, is all I'm saying."

"For years I did the little pictures about the types of people I grew up with," said a passionately gesturing Scorsese in another "Entitled" scene. "Then I did the prestige-y, historical stuff like 'Last Temptation' and 'The Age of Innocence' because I related to the characters, you know, outsiders in repressive environments making fateful choices. Then I started making the big sweeping epics, like 'Kundun' and 'The Aviator.' I've made comedies and documentaries, even concert films. Ever heard of 'The Last Waltz'? No? Okay. You should."

Continued Scorsese, "What happens? Nothing. Nothing for the versatile visionary who lives and breathes pictures."