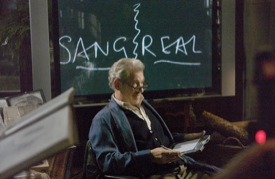 Sir Ian McKellen Explains It All For You in "The Da Vinci Code."

As a species, we humans are designed to connect the dots. But so many of our problems and mistakes arise from: 1) not knowing (due to misunderstanding or lack of information) where, exactly, the dots are; 2) not knowing what they signify; and 3) misattributing conscious intention to some hidden force behind the nature and placement of those dots.

I'm alternately amused and bothered by responses I've seen to "United 93" and "The Da Vinci Code" that claim to know, one way or another, the truth, the whole truth and nothing but the truth about the events of 9/11, the history of the bible, the historical validity of Christianity and the existence of a monotheistic deity. (I have to pause here, just to laugh at that last sentence.)

The biggest conspiracy theory yet invented by mankind is "Intelligent Design," the idea that everything that currently exists was destined to "turn out" the way it is right now because a supernatural intelligence (conspiring, apparently, with itself) made it happen deliberately. No room for chance or coincidence or (shudder) evolution in that fixed, closed-world view. But the only reason a concept as preposterous as Intelligent Design can continue to exist is because there are still so many things we don't know about the development of life on this planet (or any other). That's why Intelligent Design is also known as "God in the Gaps." Anything that's unclear or can't yet be explained? Just plug "God" into the equation and voila! -- it's complete! Conspiracies about 9/11 or Christianity are, in principle, exactly the same: Just fill in the gaps in what is known with a top-secret cabal guiding everything behind the scenes, and suddenly it all makes sense. I guess that's why they say a little bit of knowledge is a dangerous thing.

Critics of conspiracy theories too often make the very same, fundamental logical errors that conspiracists (especially Intelligent Designers) do. They assume that: 1) because there is some perceived flaw or gap in what is known, a whole set of related knowledge or information is invalidated; and 2) the only alternate theory that can replace the one they attack is (of course) the one they already hold to be true.

This results in multiple absurdities. The answer to "There sure are a lot of things that don't add up in the official accounts of 9/11" is not, automatically, "It must have all been planned by the Bush administration." Nor is it, "We know everything about exactly what happened and how." Nor is it, "The Jews did it" (though the latter has certainly been a handy one-size-fits-all explanation for a long time). The answer is: We sure need to know more before we can make sense of the evidence we already know about. Meanwhile, the truth is, a lot of information is still unavailable to the public (for reasons unknown).

Recently, the U.S. government released a few frames from a long-withheld security camera pointed at the Pentagon when it was hit on 9/11. But because that camera took only two frames per second, you really can't see much. As a BBC reporter put it: "... it doesn't add much to the sum of public knowledge." The frames were released after a Freedom of Information Act request; the government said they were part of the evidence in the trial of Zacarias Moussaoui, and therefore could not be revealed to the public until after his trial. Some officials said they hoped the "definitive" footage would put conspiracy theories to rest. Others wondered why the government waited four and a half years to release something so inconclusive.

Indeed, in the BBC video report linked to above, the reporter first says this is "the only footage" of the Pentagon attack... although five frames from a Pentagon security camera had been published by the Associated Press back in March of 2002. He claims one blurry image shows the plane "skidding" before hitting the Pentagon. I can't make out anything at all, but other images that day show no physical evidence that the plane touched the ground before hitting the building. And a frame-by-frame analysis of the video, the BBC notes: "The photos, taken by a surveillance camera, show the date of 12 September and the time of 1737, even though the crash took place the day before at 0937 local time."

What is one to make of all this? I say there is only one possible conclusion to be drawn: The evidence sure is a mess. Does that make it a conspiracy? No, it makes it a mess. The vacuum of available knowledge and information creates a natural and human desire for further explanation. It's perfectly legitimate and responsible to want to know the rest of the facts, and to wonder why so much evidence that exists is still being withheld. But it's not so logical or responsible to assume that you already know what's missing from the puzzle and why (or to attribute sinister organized causality to the whole kaboodle, thrilling as that may be).

The debate about "The Da Vinci Code" (and the origins of the bible) are similarly sloppy and inconclusive. Slate.com does a swell job of debunking pieces of the "Code," but it's not going to make biblical literalists feel any better:

In the book and the movie, Teabing asserts that other texts, such as the Gospel of Thomas, the Gospel of Philip, and the Gospel of Mary, were cast out of the New Testament because Constantine and those mean old Nicaean bishops wanted to impose their beliefs on the rest of Christendom. These texts, however, reflect an elitist attitude disdainful of ordinary Christians and their beliefs. It is unlikely that their authors ever sought to have them included with the writings of the emergent New Testament. In any case, they weren't chucked from the canon in an act of suppression. They just never won the confidence of a sufficient number of Christians to make the grade in the first place.

Advertisement
Even this paragraph (which makes the formation of the New Testament sound kind of like "Biblical Idol," with Christians voting for their favorite manuscripts) is rife with unsupportable assumptions -- for example, that the "authors" of the gospels of Thomas, Philip and Mary (for example) were a) individuals, and b) known; or that said authors would even be aware of any "emergent New Testament" canon; or that proponents of any gospels would necessarily know of, or be able to seek inclusion in, such a canon.

I guess you could say the bible, as we know it, evolved over eons, shaped by many influences of many different kinds. It is a patchwork of incomplete and inconsistent texts from a variety of sources, created and edited and copied by many different people(s) in different regions and times and circumstances and languages. That, however, doesn't make for such a taut thriller structure, so Dan Brown took innumerable liberties with the bible's history to construct his fictional best-seller.