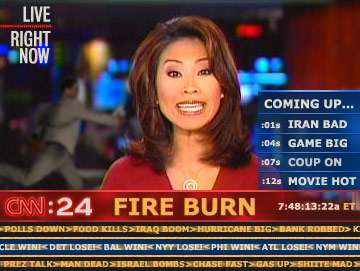 Television network and cable "news" in a nutshell. From The Onion today, the Wall Street Journal tomorrow:

ATLANTA—Last week, after a reported 65 million Americans learned of the bipartisan immigration bill with the breaking news report "Mexicans Stay," it became apparent that the much- ballyhooed 24-second news cycle had come into its own. [...]

CNN is widely credited with initiating the acceleration of the modern news cycle with the fall 2006 debut of its spin-off channel CNN:24, which provides a breaking news story, an update on that story, and a news recap all within 24 seconds. In addition to creating its groundbreaking format, CNN:24 broke many important stories with reports such as "Ford No Money Everyone Fired," "Iraq Bomb Kill Truck," "Country Hates Bush," "Dow High Now," and "Squirrel Water Skis."

"TV news reporting has always been about breaking the story down into only the barest, most salient facts, but the breakneck pace of contemporary reportage doesn't allow for that anymore," said Professor Robert Kubey, director of the Center for Media Studies at Rutgers University. [...]

A typical [MSNBC] News Moment segment includes seven seconds of lead stories, four seconds of developing news, the "International Second," "Weather on the 00:00:13s with Bob Van Dorn," "The Fastest Four Seconds in Sports," a two-second top stories recap, and wraps with four seconds of mixed entertainment and lifestyle pieces. In larger markets such as New York and Los Angeles, this last portion may be preempted by local news.