That's why they call it 'acting' 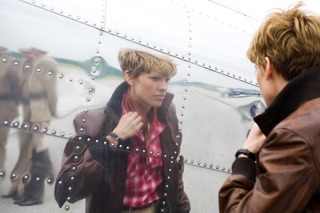 The big news is that TLRHB (That Little Round-Headed Boy) is back! And here he is, asking some pertinent questions about the art and craft of acting in response to Hilary Swank's comment in the Los Angeles Times: "You can't play Amelia Earhart and not learn how to fly. That would be a huge flaw. I'd be fired immediately."

I always get a chuckle every time I read about a group of pretty-boy actors going to a three-week "boot camp" to learn how to play a soldier. Imagine asking Spencer Tracy or Gable to go to a boot camp. Did John Wayne go to Western Camp to learn how to ride horseback? Did Bogie go to detective school? Did Cary Grant study paleontology before filming "Bringing Up Baby"? Did Errol Flynn go to pirate camp? (I bet Johnny Depp didn't, either. He created his Jack Sparrow persona out of the pure creativity in his mind, and a little bit of vampishness and Keith Richards.) [...]

[It] strikes me as a slap-in-the-face to an actor's imagination (and the audience's) to equate learning how to fly with being able to play a flyer on screen. It also seems to downgrade the "playing" that should be central to the very definition of acting. What Swank is saying is that acting is not "playful" at all. "It's hard work, people! Serious stuff. I'm not getting paid millions to shoot toothy grins at Richard Gere. I actually had to prove I was worthy of the role by learning to fly!"

Please. You got the role because you've got two Oscars and you looked like Amelia Earhart. Period.

I have one thing to add. Rich people are weird about money. Some will spend a fortune to save a dollar (because they have the resources to), but mostly they like to feel that they're getting a deal -- or, better yet, something for free. It doesn't matter that they could easily afford to buy whatever it is they want, or that it may be much easier and simpler to do so. The important thing is that they get someone else to pay for something. So, no doubt one of the perks of playing this role for Hilary Swank was that she got the production to pay for flying lessons. And, if she spent anything herself on "preparation," it's a legitimate tax-deductible work expense.