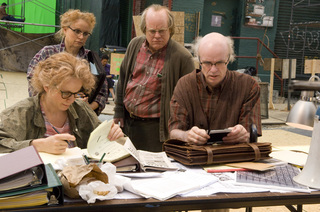 A man who has received a large sum of money hires people to re-enact scenes from his own life, staged on the actual locations and on sets he has constructed for the purpose.

That's a selective synopsis of the premise of "Remainder," a 2005 novel by Tom McCarthy. As I was sitting through "Synecdoche, New York," I couldn't help feeling that I'd somehow seen this done before (yeah, I know -- the movie is in part about that feeling)... and then I remembered "Remainder." The first-person narrator, who has suffered brain damage in an accident, becomes obsessed with meticulously reconstructing the events surrounding it. Having turned his apartment building, and the blocks around it, into a living set -- available round the clock for command performances, he stages a run-through of one sequence in a warehouse at Heathrow:

I'd had a raised viewing platform built, a little like an opera box, because I'd enjoyed watching the action in my building from above and wanted a similar option here. I'd established that I might roam around the re-enactment area itself, and that the re-enactors shouldn't be put off by this. I chose to begin watching the re-enactment from the platform, though.

Later, he describes his living role as actor, director and audience, revising and perfecting the re-enactment, which becomes a more-or-less permanent project:

I spent a long time there, watching. I also spent a lot of time sitting in my living room staring at the sketches and prints, or lying in my bath thinking about the re-enactment, knowing that it was continuing, constantly, on a loop. Sometimes I concentrated on each movement, each maneuver; but sometimes I thought of other matters altogether. For a couple of days I returned to the study of my building, keeping the whole place in on mode for two ten-hour stretches with only two hours' break between them. Then I drove back to Heathrow and watched the tyre sequence through fifteen times. 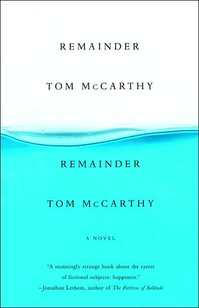 "Synecdoche"'s literally self-absorbed playwright is a hack suburban-theater director whose magnum opus endlessly recapitulates his lack of talent and imagination. (Or, if you prefer a slightly different reading, the project reflects his doubts about his talent and imagination after he receives a "genius grant" and desperately strives to conceive something worthy of the label.) Or maybe the film is just about Charlie Kauffman looking so deeply into his navel that he can see his poop come out his own butt, one of the movie's favorite images.) "Remainder"'s brain-damaged re-creator exhibits no artistic ambitions, just a desire to pursue the authentic, after he becomes convinced that the post-accident life he's living is not. He desires the realness of a movie... of De Niro in "Mean Streets."

Every move he made, each gesture was perfect, seamless. Whether it was lighting up a cigarette or opening a fridge door or just walking down the street: he seemed to execute the action perfectly, to live it, to merge with it until he was it and it was him and there was nothing in between....

I'd always been inauthentic. Even before the accident, if I'd been walking down the street just like De Niro, smoking a cigarette like him, and even if it had lit first try, I'd still be thinking: Here I am, walking down the street, smoking a cigarette, like someone in a film. See? Second-hand. The people in the films aren't thinking that. They're just doing their thing, real, not thinking anything. Recovering from the accident, learning how to move and walk, understanding before I could act -- all this just made me become even more what I'd always been anyway, added another layer of distance between me and the things I did.... I wasn't unusual: I was more usual than most.

As a member of the Eternally Self-Conscious, I'll second that. The perfection of movies is rooted in their repeatability (yes, time can be recaptured!), and their susceptibility to study. You can stare at them, and the people in them, and it's OK! You can study people's behavior. You can (with repeat viewings) savor the anticipation of things that you know have already happened -- an expression, a shadow, a camera movement... (Yes, putting a frame around something adds a dimension to the original, even as it removes the original from its context.)

And, of course, great movie acting isn't necessarily about being, or even appearing, authentic at all. It's about presenting something to the camera (and the audience) for scrutiny. New Yorker television critic Nancy Franklin puts it very nicely when she writes of Toni Collette as a performer who, "like Meryl Streep, has the ability to both disappear into a role and to persuade us that, whatever character she's playing, she's showing us her core."

That doesn't mean incessant soul-baring; it also means withholding and creating mystery. One of my favorite acting stories (I'm sure I've mentioned it before) is from Kathleen Turner, who once described trying to do a crying scene by accessing the "authentic" emotion and making herself really cry on camera. She said the result was terrible, utterly phony-looking, even though, for the actor, it was the "real" thing. Acting is not re-experiencing emotion; it's conveying it to the audience as if it were being experienced first-hand.

The notion that we are all stars, writers and directors -- or, at least, featured players, uncredited polishers and assistant directors -- of our own lives isn't anything novel, but it's hardly surprising artists feel compelled to revisit (or re-enact) the concept from various angles...