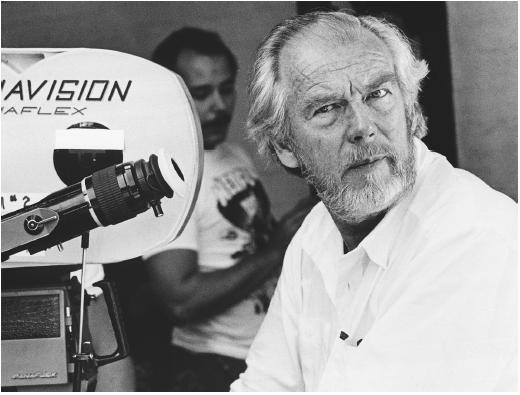 Sven Nykvist, behind the camera.

Roger Ebert interviewed the late master cinematographer Sven Nykvist in a fascinating visit to the set of "Face to Face" in 1975:

Sven Nykvist photographs Bergman's films. He is tall, strong, fifty-one, with a beard and a quick smile. He is usually better-dressed than Bergman, but then almost everyone is; "Ingmar," a friend says, "does not spend a hundred dollars a year for personal haberdashery." Nykvist first worked for Bergman on 'The Naked Night' in 1953, and has been with him steadily since 'The Virgin Spring' in 1959. This will be his nineteenth title for Bergman, and the two of them together engineered Bergman's long-delayed transition from black and white to color, unhappily in "All These Women" and then triumphantly in "The Passion of Anna" and "Cries and Whispers."

Nykvist is in demand all over the world, and commands one of the half-dozen highest salaries among cinematographers, but he always leaves his schedule open for Bergman. "We've already discussed the new film the year before," he says, "and then Ingmar goes to his island and writes the screenplay. The next year, we shoot -- usually about the fifteenth of April. Usually we are the same eighteen people working with him, year after year, one film a year."

At the Cannes Film Festival one year, he said, Bergman was talking with David Lean, the director of "Lawrence of Arabia" and "Doctor Zhivago." "What kind of crew do you use?" Lean asked. "I make my films with eighteen good friends," Bergman said. "That's interesting," said Lean. "I make mine with 150 enemies."