If you've recently re-watched, as I have, Steven Spielberg's "Jaws" (1975), "Close Encounters of the Third Kind" (1977), " "E.T. The Extra-Terrestrial" (2002), or any of his kid-friendly fantasy/adventure/science-fiction pictures -- or the later, harsher "A.I. Artificial Intelligence" (2001) and "War of the Worlds" (2005) -- you'll quickly recognize that J.J. Abrams' Spielberg-homage "Super 8" (co-produced by Spielberg himself) is a mere shadow of the work that inspired it. The aforementioned Spielberg movies still dazzle, shock and inspire awe -- not only in their justly famous set pieces, but in the richness and sophistication of their shot-by-shot inventiveness. They're spellbinding because they always show you more than you realize you've seen.

Spielberg is a prodigiously adroit filmmaker; Abrams is a guy who has a lot of genuine affection for Spielberg's movies. And, for me, that at least makes "Super 8" far more watchable than, say, Richard Donner's desultory 1985 Spielberg clone "The Goonies," though it's nothing as lively or inventive as Joe Dante's 1984 "Gremlins," either (and, yes, Spielberg is listed as a producer on all three of these pictues).

Spielberg's popular entertainments do tend to feature suburban kids, fractured families, monsters, and such -- but that's not what the movies are about. Beneath the surface (and what gorgeous surfaces they are), these are sophisticated cinematic works. (I long ago made the case that "E.T." and "Close Encounters" are daring abstract experimental films that just happened to be thrilling and moving narrative movies, too.)

The setting for "Super 8" is suburbia (Lillian, Ohio) in 1979 or thereabouts. The first shot is memorably Spielbergian: The camera cranes through the interior of a factory where a worker on a ladder is changing the numbers on a big "Days Since Last Accident" sign from 784 to 1. Cut to a house where people are gathering after the funeral. A kid sits alone on the swing set outside in the snow, holding a silver necklace. The dead factory worker was his mom. (Spoilers follow.)

The best thing Abrams' movie has going for it are the kids -- especially Joe (Joel Courtney), the son of the worker who's just been killed and the town's deputy, Jack (Kyle Chandler), and Alice (Elle Fanning), the son of Louis (Ron Eldard), the drunkard from the other side of the tracks whom Jack blames for his wife's death. The chemistry between these two -- she, the lead actress in a Super 8 zombie movie being made by Joe and his friends; he, the make-up and miniature special effects artist -- is charming.

But that also points out one of the movie's problems: Alice, Jack and Louis know the circumstances behind Joe's mom's death, but Joe doesn't, and we in the audience don't either. Once we and Joe do find out, in a tearful confession from Alice, it's so minor -- Louis's involvement is tangential and unintentional and not at all related to the accident -- that Joe quite rightly shrugs it off, as bewildered at his father's overreaction as we are. And once it's acknowledged out loud between Louis and Jack, as they are setting out together to find their missing kids, the "misunderstanding" or the emotion or whatever it was just evaporates. It's a cheat and an anticlimax to withhold this information (which must be known to everyone in town except Joe) from the audience for so long, to artificially build up its importance, when it's used only as a Romeo & Juliet gimmick to make it harder for Joe and Alice to see each other. (You'd think the fact that she's eventually kidnapped, drugged and hung from the ceiling in a fugitive's creepy underground hideout would be enough of an obstacle keeping them apart.)

Other structural weaknesses prevent the movie from achieving Spielbergian satisfactions. Things don't pay off -- in terms of character, story or visuals. When the kids are shooting their Super 8mm movie at an old train stop one night, there's a nightmarishly exciting crash ("Production value!" the kid director yells). Joe picks up a strange object from the wreckage that reminds him of a white Rubick's cube. Later, we learn that it's one of the building blocks of an alien spaceship, and that the U.S. Air Force, which has swarmed to the scene of the disaster, is very serious about collecting them. (Oddly, nobody from town bothers to come out and gawk at the scene of the catastrophe but the kids, even though it's all over the TV news.) So, does the alien want or need this object that Joe has? Are the soldiers looking to confiscate it? We don't really know. It just flies away and gets stuck to the side of a water tower one night and that's the last we see of it. It's not even a MacGuffin, just a dead-end distraction. (It is possible that the block is needed by the alien -- but it's not worked into the film.)

One of the Mysterious Happenings after the train wreck (and we won't even get into how a man can drive his pickup head-on into a locomotive, cause such a horrendous wreck, and be found alive, sitting behind the wheel of the still-intact truck we have just seen explode) is that mechanical and electrical devices (car engines, microwave ovens) suddenly go missing. Along with some people. And it's a nice, creepy touch that the town's dogs sense enough trouble that they evacuate the county on their own. 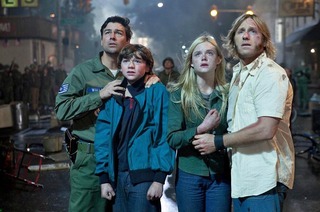 So, the alien spends a lot of time at night roaming around town throwing electrical appliances into the air and killing or injuring or kidnapping townsfolk. (We don't find out about the fates of more than a few, even though we see many either crushed or snatched away.) In the last few minutes, the alien uses some kind of magnetic force to assemble a whole lot of this stuff around and on top of the town water tower (kind of a stand-in for Devil's Tower in "CE3K"). Joe, an avid model-builder, says: "He's building a model." But he's not. Within a few minutes it all changes into a sleek spacecraft and blasts off. Nothing wrong with that (this is a science-fiction fantasy, after all), but we don't get much satisfaction from the way it is revealed. There's no payoff -- even with the requisite low-angle shot of the fractured-and-reunited family members staring at an off-screen light. What's missing is the sense of awe such shots are meant to express and inspire.

There is a touching moment (that feels inevitable) when the magnetic forces pulling all metal objects toward the water-tower junkpile tugs on the locket belonging to Joe's mom. He holds on, then lets go -- as if this were the last thing the ship needed before it could take off. OK... but was Joe really having difficulty letting go of his mom after her death? Wasn't he playing with his friends, making movies with them, enjoying flirting with Alice, etc. It's the adults who were having the problems, not the kids. If the climax doesn't have the emotional lift you feel it needs, it's because the emphasis is misplaced, the metaphor isn't quite right.

Another disappointing pattern in "Super 8" is that it gets the audience to ask questions it doesn't bother to resolve. Not just things like, what the alien was doing underground with all those household appliances, but, more significantly, why he (I'm calling the alien a "he" because Joe did) kidnapped people and hung them upside down and unconscious in his cavernous lair. If a movie makes a point out of the disappearance of a lady whose hair is in rollers and later she is discovered (for a comedic payoff), only to be violently dispatched, we really ought to be let in on her fate.

Spielberg is operatic -- he's not afraid to stretch out time and heighten emotion when the moment calls for it. Abrams is only directing the libretto. "Super 8" is an affectionate tribute, but it doesn't sing.

A few atmospheric touches I appreciated in "Super 8":

-- The alien's breath blowing Joe's hair, the threat so close you can almost smell it.

-- The casting of the pyromaniac kid, who looks like a blond Jackie Earle Hailey with braces.

-- The fat kid's line, supposedly quoting his doctor: "I haven't leaned out yet."

-- The reveal of the alien in the Super 8 footage, glimpsed on the side of a kid's t-shirt. (Can somebody remind me of how this is set up? I liked the idea but, as I remember it, it didn't feel quite right. Where is the projector, where is the screen, where is the camera, and which direction are the kids facing when the image of the monster appears?)

-- The blue pseudo-anamorphic lens flares even when there's no source for them. (Kidding!)

How'd the movie work for you?