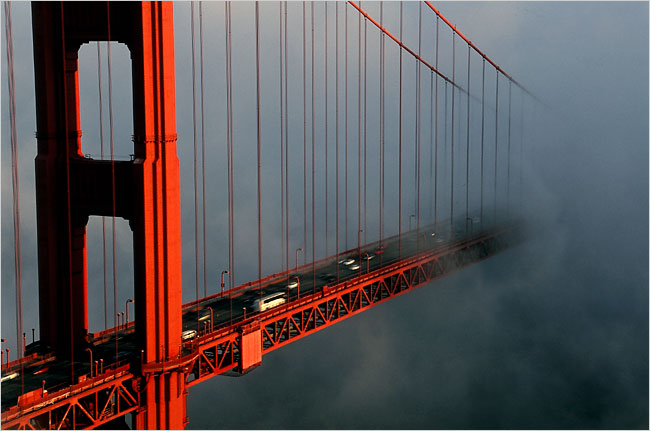 Bridge into the void...

Today in the Chicago Sun-Times and on RogerEbert.com I have a review of Eric Steel's documentary "The Bridge," which has haunted me for two weeks since I first saw it. A movie that takes suicide seriously, and considers the pain of the person who wishes to die as well as the anguish and guilt of the survivors, is a rarity. Over and over, survivors say they don't understand why someone they knew and loved wanted to cease to exist; but a surprising number admit the agony that would drive someone to suicide is beyond their imagination. They have to accept, and respect, that it was real.

A father says: "Some people say the body is a temple. He thought his body was a cage, a prison. In his mind, he knew he was loved, that he had everything and could do anything. And yet he felt trapped, and that was the only way he could get free." "The Bridge" makes the unthinkable, taboo subject of suicide real in honest and realistic ways that maybe even those who have never considered it can understand. The mother of a jumper recalls it took someone else to finally get her to realize: "It's not about you. It has nothing to do with you." That may be as hard for some to get their heads around as the suicide itself. Suicide is the ultimate solipsistic act; it's not about anyone else.

The few, mostly superficial discussions of suicide we have in our culture (30,000+ in the U.S. in an average year; only about 25 or so off the Golden Gate, which is nevertheless the world's leading suicide destination), tend to objectify the suicidal person and concentrate on prevention and grief and downplaying the reality out of fear that others may be encouraged to try it. Copycat incidents are real, but peer pressure is not one of the leading causes of suicide -- particularly off the Golden Gate Bridge. It takes a certain kind of personality choose such a dramatic, public exit, and the bridge is already famous as a suicide spot.

"The Bridge" is being used by some to advocate a multi-million-dollar barrier to help prevent jumping off the Golden Gate. I guess one's attitude toward this would depend on whether you see suicide as a problem of mental illness or architecture. Barriers have to be erected to keep people from accidentally falling off tall structures, and to protect those below. But I don't know of anyone who has accidentally gone off the bridge (unless, perhaps, they foolishly decided to jump up on the railing), or anyone who has been hurt by a falling suicide jumper. "The Bridge" de-mythologizes and de-romanticizes suicide. I think that's healthy.

Looking this closely and intently into suicide, you almost fear too much empathy, the way you dread the vertigo that accompanies acrophobia: What you're afraid of is not so much that you might fall, but that impulse within you that wants to eliminate the yawning tension between you and the surface below. But as several in the film acknowledge, the eternal dilemma of suicide is not something we can diminish by hushing it up or mischaracterizing what it is.