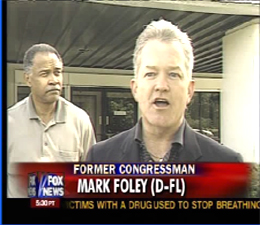 Unbelievable? You bet! Here's your Fox News: See, on Bill O'Reilly's Nothing But Spin Zone, they simply turned Mark Foley into a Democrat, even though he's a Republican. Who cares about basic facts? Hey, the Fox slogan doesn't say anything about being "accurate."

I'm supposed to be "on vacation" this week, but this was just too good. People are always complaining about studies that simply "prove" the obvious, but in-depth studies and analysis are absolutely needed in a country where majorities of people believe things that are factually wrong (say, that Saddam did indeed have WMDs) or disbelieve things that have long ago been demostrated to be true (say, evolution). So, here comes a journalism study from Indiana University that finds news coverage on "The Daily Show with Jon Stewart" is as substantive as network news. The only part of this I question is the word "as." It should be "more." If you don't read newspapers and listen to NPR, you might not even understand what's being satirized on "The Daily Show" and "The Colbert Report." If you got most of your news from network evening newscasts, you wouldn't know what the hell was going on. (See this transcript from a recent Katie Couric CBS Evening Gossipcast, posted on the blog of a prominent conservative.)

No, Stewart and Colbert may claim to be the "fake news," but they are firmly rooted in the "reality-based community" -- and provide more incisive cut-through-the-bull analysis of current events than anything on commercial television. (Only "Frontline" goes deeper -- the show that, as at least one TV critic pointed out earlier this week, would have told the powers in the White House and the Pentagon and the intelligence community the things they needed to know, but now claim they didn't, if they'd only bothered to watch it. It's on PBS, Condi!)

From the official announcement of the "Daily Show" study, to be published in the Journal of Broadcast and Electronic Media, published by the Broadcast Education Association:

BLOOMINGTON, Ind. -- Which would you think has more substantive news coverage -- traditional broadcast network newscasts or "The Daily Show with Jon Stewart"?

Would you believe the answer is neither?

While much has been written in the media about "The Daily Show"'s impact, Fox's study is the first scholarly effort to systematically examine how the comedy program compares to traditional television news as sources of political information.

The study, "No Joke: A Comparison of Substance in 'The Daily Show with Jon Stewart' and Broadcast Network Television Coverage of the 2004 Presidential Election Campaign," will be published next summer...