Spots before your eyes!

(Not these. They're just old-school changeover marks.)

Have you seen them? The first time I noticed them I thought they were just flaws in the print due to some glitch at the lab. But there was something too neat and geometrical about them. Their appearance was almost subliminal, but I became conscious of seeing them in almost every movie, like changeover marks. (See shot from "Fight Club," above. The first time I saw Tyler Durden I thought he was a lab mistake, too.)

I thought I figured out what they were, but I wasn't certain. Now David Bordwell brings them out of the shadows in a post that's mostly about something else -- the history of bugs, those company logos in the corner of the picture, which I remember first seeing during the early seasons of "The Simpsons" on the nascent Fox network. He spotlights something that's been bugging me for a while:

I had hoped to include a frame illustrating the anti-piracy stamp used on current 35mm releases, but couldn't find one quickly. This mark consists of a tight pattern of dots resembling a character in Braille. The stamp would presumably be copied if someone shot off the screen or ran the film through a telecine. How effective these bugs are at tracing pirate copies I can't say, but you can detect them, especially in bright scenes; I usually notice one every third reel or so, just left of the center of the frame. I'll keep looking for a frame and try to add one to this entry.

UPDATE: From OlliS, via Wikipedia, a very simple example of the CAP code: 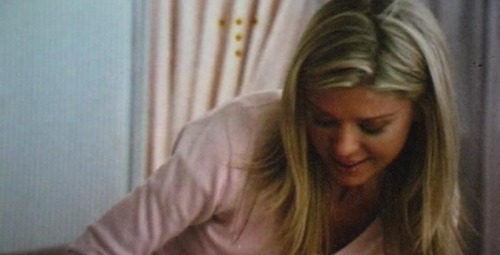