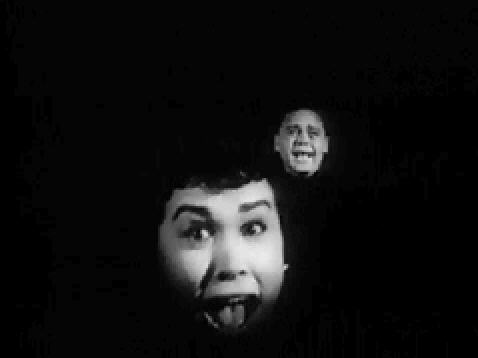 M. Nightmare Shyamalan: "Sometimes Night would close his eyes and see little oval black and white head shots of Nina Jacobson and Oren Aviv and Dick Cook floating around in his head, unwanted houseguests that would not leave. The Disney people had gotten deep inside his head, interfering with the good work the voices were supposed to do — and it would be hell to get them out." Image from a seminal Shyamalan influence: the trailer for William Castle's "The Tingler."

Critics may argue about how much talent M. Night Shyamalan has as a filmmaker. But in The Village called Hollywood (and the offices of advertising agencies hired by American Express), he's still seen as a marketable brand name. That's why some profess to be shocked, shocked that the endlessly self-promoting Shyamalan has such nasty things to say about Disney, his former studio home, in a new book, "The Man Who Heard Voices: Or, How M. Night Shyamalan Risked His Career on a Fairy Tale." According to The Guardian:

The all-out critique of Disney has astonished industry insiders in Hollywood, where arguments between directors and studios are commonplace but rarely aired in public. Not so for Shyamalan's industrial-sized fallout with Disney. Early drafts of the book circulating in Hollywood are leaving many stunned at how strongly the director has turned on his old studio.

The book attacks colleagues and mentors at the company where he forged his hugely successful career. At its core is Shyamalan's feeling that Disney was not giving him enough artistic backing on his latest project, a supernatural thriller called "Lady in the Water." Though Disney was keen to fund the film, Shyamalan felt it did not trust him enough as a director.

("Lady in the Water" will be released by Warner Bros. this summer, along with Shyamalan's "tell-all" book.)

Studios would love to be able to put out saleable product without the need to employ bothersome "talent" -- above-the-line "creatives" like directors, writers and actors. But no matter how brilliant the notes from management and the development execs, they just haven't figured out how to make the movies themselves. Then they're surprised when the temperamental talent gets upset and takes "creative differences" personally. Well, that's because for writers, directors and actors, what they do is personal. For the development gang it's all "just business."

Shyamalan gets especially dramatic when it comes to a Disney exec, Nina Jacobson:

Elsewhere the book pulls no punches in assailing Jacobson, with whom Shyamalan worked so closely for many years as his career soared. The book says Shyamalan: ' ... witnessed the decay of her creative vision right before his own wide-open eyes. She didn't want iconoclastic directors. She wanted directors who made money.' It even says that Shyamalan felt mentally haunted by Jacobson and other Disney executives and could not shake the images of their faces from inside his head.

Think that sounds over-the-top? I don't. I fully believe Shyamalan has suffered from these nightmarish visions. I would be more surprised to learn that he didn't, because I can't imagine anyone working with studio execs who wouldn't have them. See Christopher Guest's "The Big Picture" -- scarier and funnier than anything in Shyamalan's oeuvre.