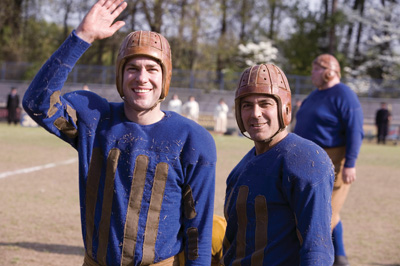 John Krasinski and George Clooney: Which one's the Ralph Bellamy?

My review of "Leatherheads" is in the Chicago Sun-Times and on RogerEbert.com. (Also: "Shelter.") Here's an excerpt:

The script is less than effervescent, but Clooney and his cast are game. Although "Leatherheads" probably has fewer dull moments than your average NFL contest, sometimes you wonder if the clock is still ticking or if somebody's called a timeout. A scene will end and, just as you're moving on to the next one, you may find yourself wondering: Why was that there?

Yet there's always something interesting to notice: a face, a throwaway visual joke, the way the winter rain on a window contributes to the tone of a scene, or the sight of the muscular 1920s Chicago skyline in the distance behind the ballfield.

Even before the opening credits montage is over, Clooney demonstrates the fleetness of his comedic footwork -- getting a better laugh from a cow and a ball than you'd have any right to hope for. He knows how to compose a shot (the retro short-focus camerawork by Newton Thomas Sigel immediately puts you in a classic Hollywood frame of mind) and how to cut comedy so that it doesn't cramp the actors' style.

Best of all are the picture's abundant grace notes. Clooney's a team player, and his generosity toward his collaborators, as an actor and a director, shines throughout the movie....

You'll probably remember the image of a hulking high schooler named Big Gus (Keith Loneker) standing and beaming at a train station. And Belinda (Heather Goldenhersh), the archetypal flapper with a mouth of potty. And a moment in a speakeasy, after a long night and a big brawl, in which soldiers and football players gather drunkenly around the piano (manned by score composer Randy Newman himself) to sing "Over There."

In the final chorus, the camera drifts over to a Bulldog with a buzz-cut named Curly (Matt Bushnell), who finishes the song by himself in a gentle, lingering closeup -- one that reminds you of why we go to the movies.