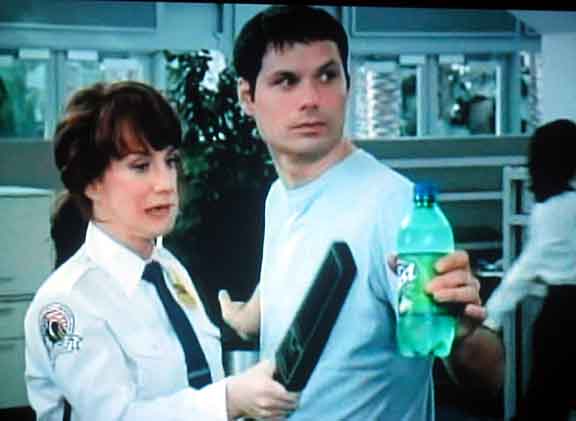 This Sierra Mist commercial featuring Kathy Griffin ("It's Pat," "Pulp Fiction," "My Life on the D-List") and Michael Ian Black ("Ed," "The Baxter," "Stella") ran on Thursday night's edition of "The Daily Show," which featured a brilliant report about the foiled British bomb plot involving the use of liquid explosives aboard airliners. Correspondent John Oliver on the sudden ban on carrying liquids aboard passenger jets: "I'm afraid these terrorists have struck at what we in the West hold most dear: our beverages. They resent our wide array of fluid refreshment options. We live in the most easily quenched part of the world and they hate that.... Unfortunately, the men arrested were British citizens, which means the form of government here in Britian must not be democracy, for as you know, democracy is the only known antidote to extremism... It means regime change, Jon. America must topple the British government."

The premise of the ad is that airport security guard Griffin detains Black and pretends her wand is beeping when she passes it over his bottle of Sierra Mist. Don't expect to see this spot in heavy rotation much longer....