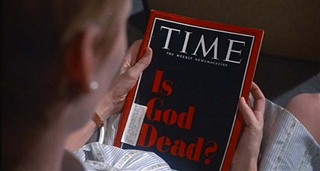 To the shock of God and everybody, Michael Bay and company will not be bringing up "Rosemary's Baby." Plans for a rebirth reconceptualization remake of Roman Polanski's 1968 horror masterwork, based on Ira Levin's best-selling novel in which the bambino of Beelzebub receives evil prenatal care at the Dakota building at 72nd and Central Park West, have been abandoned because the producers couldn't conceive a way to make it viable for today's post-Cheney audiences. Taking a break from their elocution lessons in Wasilla, Brad Fuller of Bay's Platinum Dunes company tells Collider.com:

"Rosemary's Baby" was announced and it's like a little bit like we're taking about with Freddy [Kreuger]. We went down that road and we even talked to the best writers in town and it feels like it might not be do-able. We couldn't come up with something where it felt like it was relevant and we could add something to it other than what it was so we're now not going to be doing that film.

Instead, the remakers of "The Texas Chainsaw Massacre," "The Amityville Horror" and "The Hitcher" are proceeding with their remakes of "A Nightmare on Elm Street," "Friday the 13th" and Alfred Hitchcock's "The Birds."

God, whose 1966 TIME magazine cover story made a cameo appearance as an old doctor's office copy in Polanski's film, was not available for comment.