Restoring your faith in America

BAD WORD WARNING: In a world where people are stupid enough to mistake a childrens' lightbox toy displaying the likeness of a cartoon character (which looks no more sinister than any random Pac Man-era video-game pixel blob) for a bomb -- and then blame other people for their own ignorance -- the only proper response to this...

That's right: The Aqua Teen Hunger Force marketing campaign had been under way in ten cities for " a few weeks" by the time some non-basic-cable-subscribing Luddite in Boston freaked out the whole of Beantown by mistaking a wall-mounted LiteBrite for a bomb. 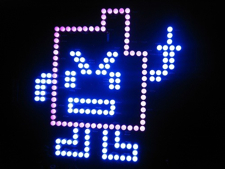 The Mooninite in question.

Kids: Do not take your Etch-A-Sketches out of your room, or you may be arrested as a terrorist. Or a hoaxter. Because, goodness knows, anyone in their right mind might easily mistake a plastic rectangle with a picture on it for an improvised explosive device and start a citywide panic via TV news before the authorities have the slightest idea of what's going on. That's called Homeland Security. Don't mass outbreaks of unnecessary panic and fear make you feel secure? What's the root word of "terrorism" again?

You know, if the goal of terrorists and the whole point of terrorism is to scare the sh-t out of us so badly that we leap ten feet in the air whenever someone says "boo," then the terrorists are clearly kicking our national asses.

And if "The Departed" doesn't win an Oscar, it's the fault of the city officials and broadcast media of Boston for perpetuating this hoax about a hoax and making everyone in the world want to avoid acknowledging that Boston exists. Again. People are too embarrassed and infuriated to even want to think about the laughingstock town of Boston now -- and it's right in the middle of Oscar voting time! (That makes about as much sense as the whole "terrorist hoax" canard, doesn't it?)

Evidently, this is a conspiracy by Bostonians to spread fear and uncertainty -- terror, if you will -- that Martin Scorsese may not win his long-deserved Oscar. Why did he have to shoot -- er, I'm sorry, film -- the movie in Boston, for heaven's sake?!?! All Boston politician and broadcasters who have perpetuated and promoted this hoax should be arrested, fined, and forced to watch the Cartoon Network 24/7 for 60 days, until well after the Governor's Ball. And they should be forced to apologize -- to the Mooninites, Turner Broadcasting, and to all the people of the world, for being so reckless and irresponsible.

This is just one of many, many times to come when I will dearly miss Molly Ivins. She would have had a ball with this.