Reports of Skip's death have been somewhat exaggerated 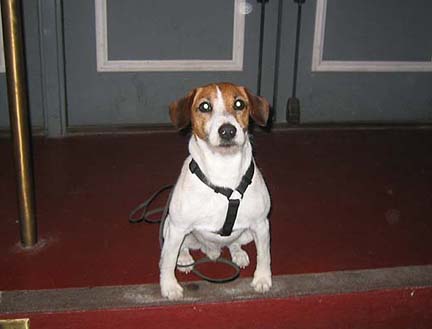 Enzo is still with us.

It was widely reported that Moose, the 15-year-old Jack-Russell Terrier who played the title role in "My Dog Skip," and who played Eddie on the long-running TV sitcom "Frazier," passed away at the ripe old age of 105 in dog years. (He would have been 16 -- or 112 -- December 24, according to IMDb.) While we mourn the passing of Moose, we should point out that he played Old Skip in the movie, while his son Enzo played Skip for most of the film. (Actually, there were reportedly six dogs who performed as Skip in various capacities.)

Likewise, Enzo replaced Moose on "Frazier" after eight years on the show, which ran from 1993 to 2004. But while dogs may be good enough actors to play the same role (like, say, Dick York and Dick Sargent), we should remember that they are not interchangeable. They are individuals. I know this. I live with two of them, and Frances and Edith are very distinct personalities.

I used to live in Los Angeles and work in and around the movie industry, where I encountered hundreds of celebrities in situations ranging from the casual (say, at the drugstore) to the professional (on a set, in a meeting, or for an interview). But my favorite movie star sighting ever came at the Overlooked Film Festival in 2004, where a man and his dog exited an elevator in the Illini Student Union Building -- and I immediately recognized the dog as Skip. (It was Enzo -- a surprise guest at a matinee screening of "My Dog Skip.") Of course, I took a picture.