I just want to say: Wow! Here are frame grabs from three shots in Kenji Mizoguchi's 1936 "Osaka Elegy" ("Naniwa erejî") that strikingly illustrate what in-depth staging and deep focus are all about. In the first one, we see Ayako (Isuzu Yamada), a switchboard receptionist at Asai Pharmaceutical, in her glass operator booth. The image has an Art Deco sheen to it (highlights on shiny objects twinkle with little starbursts) and the frame is soft around the edges, but in the center the focus is deep. I don't know if the blurred edges are a separate artistic choice or simply an optical property of this particular lens.

Anyway, this is our introduction to Ayako, who appears in a close-up profile on the left side of the frame. She notices a woman enter the office to speak with Susumu Nishimura (Kensaku Hara), a young man with whom, we will learn, she has an undeveloped romantic friendship. Ayako places a call and we realize who she's calling when Susumu -- that's him in center frame -- answers it. (He may look a little out of focus in this particular frame, but that's only because he's moving his head.) She turns her face away from us to make eye contact with him across the room, and as she does so we see her face reflected in the glass of her booth. Fantastic! It's a spectacular composition, but it develops without seeming contrived, leading your eye from place to place in the shot quite naturally as you discover what's going on. 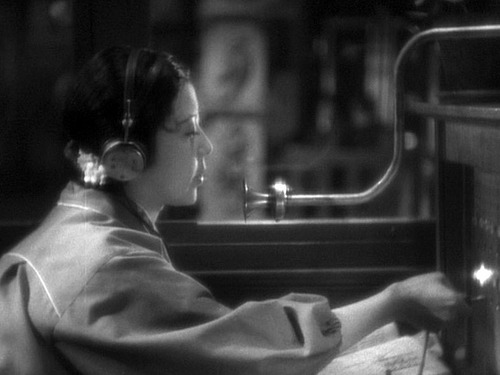 The second shot, from a little later in the film, shows Ayako back at the switchboard, but this time there's no action of interest in the outer room, so Mizoguchi doesn't call our attention to it. He leaves it out of focus and we stay behind the glass with Ayoko as she distractedly flips through a magazine. (One headline reads: "A Woman Corrupted By Money.") 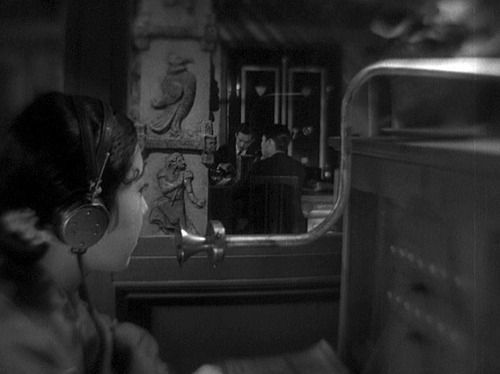 In the third shot from the switchboard booth, the entire frame is in focus, emphasizing the proximity of the two characters. Again, she has called him -- this time to set up a rendezvous. She's about to ask him if he will lend her some money to pay off her father's debts...

These shots had a particularly strong effect on me since I've been thinking and writing about James Cameron's 3-D staging and depth of focus in "Avatar" -- and why his persistent choices strained my eyes and gave me a headache. More about that later, but the principle Mizoguchi demonstrates here is worth noting: Let the action and the composition lead the eyes where they want to go. If you're going to put interesting or relevant things in the background, let the audience see them. In focus. If not, don't stage and frame the shot with distracting action in the distance (or the foreground) that competes for the viewer's attention, especially when the 3-D effect tricks the eyes into believing they can be brought into focus. 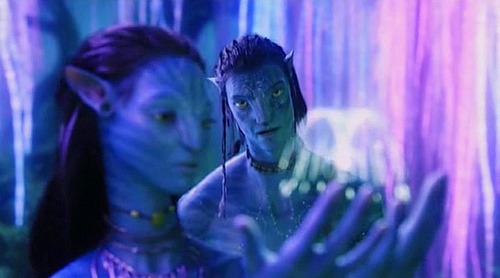 Our eyes are naturally drawn to faces and eyes (and you can't miss the golden, saucer-sized peepers on Cameron's Na'vi), so a big face in a shot is going to capture our attention no matter what else is going on around, in front of, or behind it. The skill -- especially when working in 3-D -- is in composing the shot so that we in the audience see what we need to see effortlessly. The laziest, least creative way to do that is to simply rack focus, so that we're forced to look at only one thing at a time -- usually at the face of the person who happens to be talking at the moment. A movie may contain many different kinds of shots -- deep focus, shallow focus, telephoto, extreme close-up, extreme long shot, "plan américain," and so on. They're all part of the cinematic vocabulary and a director's job is to figure out how and when to use them most effectively.