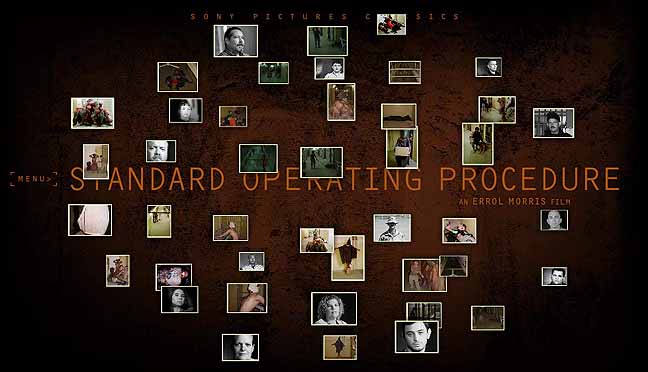 From the official "Standard Operating Procedure" web site, which mirrors the film's mosaic-like treatment of its raw material.

“…the fault, dear Brutus, lies not in our photographs but in ourselves…”

Errol Morris's new film, "Standard Operating Procedure," is not about the Abu Ghraib prison scandal. It is about the photographs themselves, and what went on in and around them, before, during and after they were taken. Perhaps the most baffling question surrounding them is why they were taken at all.

The film reflects Morris's desire to make another "investigative film" in the vein of "The Thin Blue Line." "I think of the film as a nonfiction horror movie," he says in a Q&A on the official web site. The imagery is designed to take the viewer into the moment the photographs were taken, as well as to evoke the nightmarish, hallucinatory quality of Abu Ghraib."

The title refers to the often (and sometimes deliberately) blurred distinction -- the thin invisible line, if you will -- between behaviors that would be classified under U.S. military law and/or the Geneva conventions as torture, abuse, or "Standard Operating Procedure." And its method grows out of the concerns Morris has been exploring in his New York Times column/blog, Zoom, beginning in 2007. In the first installment, he wrote:

Pictures are supposed to be worth a thousand words. But a picture unaccompanied by words may not mean anything at all. Do pictures provide evidence? And if so, evidence of what? And, of course, the underlying question: do they tell the truth?

I have often wondered: would it be possible to look at a photograph shorn of all its context, caption-less, unconnected to current thought and ideas? It would be like stumbling on a collection of photographs in a curiosity shop – pictures of people and places that we do not recognize and know nothing about. I might imagine things about the people and places in the photographs but know nothing about them. Nothing.

Morris echoes his own words in the "SOP" Q&A:

It all starts with the photographs. They are at the core of this whole project. 270 photographs were given to the Army Criminal Investigation Division, and many of them appear in the movie. "Standard Operating Procedure" is my attempt to tell the story behind these photographs, to examine the context in which they were taken. People think they understand the photographs, that they are self-explanatory. They think they know what they are about -- but do they really? That's the question. Megan Ambuhl, one of the soldiers in the movie, asks: have we looked "outside the frame?" This film is an attempt to do that.

Advertisement
Or, as Morris has written of photographs in general:

In other words, consciously or not, we tend to see what we want -- or expect -- to see. 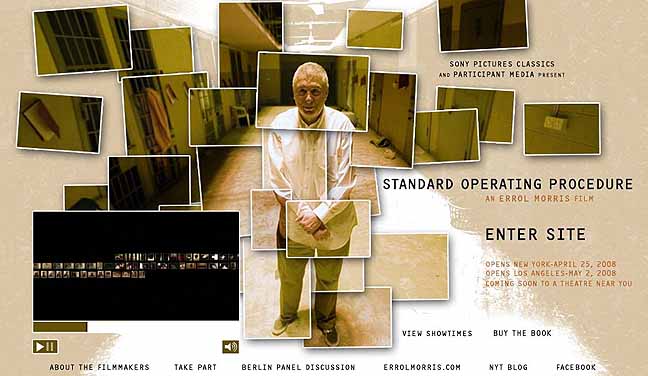 One area the film does not get into is how these amateur photographs -- taken with three personal digital cameras -- came to light, first on CBS's "60 Minutes II" and in Hersh's article. For more about that, see this "60 Minutes" story about Army Reservist MP who became the Abu Ghraib whistleblower:

And then one day, when Joe Darby wanted scenic pictures to send home, he spotted the unit's camera buff, prison guard Charles Graner.

"So I walked up to Graner and I, you know, 'Hey do you have any pictures?' And he said 'Yeah, yeah, hold on.' Reaches into his computer bag and pulls out two CDs and just hands them to me," Darby remembers. [...]

"I don't think he realized what was on, but I don't think it would have mattered either way. I knew Graner and Graner trusted me."

That trust was about to change Darby's life forever. He copied Graner's discs and gave him back the originals. Later, when Darby looked at the photos he first saw scenic shots of Iraq, but then he came upon the pictures that launched the scandal.

Darby handed over the photos to the Criminal Investigations Division (CID) -- at first "in an envelope with an anonymous letter." His anonymity did not last long -- especially after Secretary of State Donald Rumsfeld "commended" him by name in front of a congressional committee investigating the scandal: "There are many who did their duty professionally and we should mention that as well," Rumsfeld said in televised hearings. First, Specialist Joseph Darby, who alerted appropriate authorities that abuses were occurring." (Graner, former boyfriend of the infamous petite poser Lynndie England, and father of her child, is now imprisoned himself, and was the only major figure unavailable for scrutiny through Morris's
Advertisement
Interrotron.)

According to a print version of the story (also viewable on video) at the "60 Minutes" web site, reporter Anderson Cooper asked Darby if he wished he hadn't been given the photos:

"No, because if they had been given to somebody else, it might not have been reported," Darby says.

"And would that have been so bad, if it had never been reported?" Cooper asks.

"Ignorance is bliss they say but, to actually know what they were doing, you can't stand by and let that happen," Darby replies.

"There's still a lot of people though that'll say 'Look, you know, so what they did this. You know, Saddam did things that were much worse,'" Cooper remarks.

Asked if he'd do it again, Darby says, "Yes. They broke the law and they had to be punished."

"And it's that simple?" Cooper asks.

"It's that simple," he replies.

As Morris's film demonstrates, that may be the only "simple" thing about the photographs from Abu Ghraib. 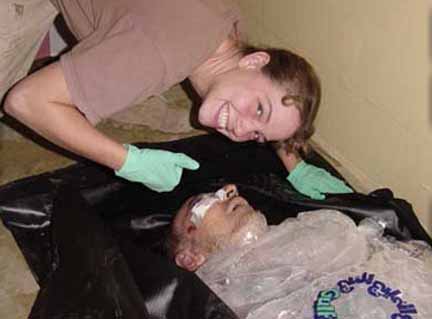 Specialist Sabrina Harman with the corpse of a prisoner killed during a CIA interrogation.

Morris and collaborator Philip Gourevitch are publishing a 304-page companion book (available May 15, 2008) that reveals more of the research that went into the making of the film. Part of it has already been excerpted in The New Yorker:

Later, [Sabrina Harman, one of the soldiers in the photos] paid a visit to an Al Hillah morgue and took pictures: mummified bodies, smoked by decay; extreme closeups of their faces, their lifeless hands, the torn flesh and bone of their wounds; a punctured chest, a severed foot. The photographs are ripe with forensic information. Harman also had her picture taken at the morgue, leaning over one of the blackened corpses, her sun-flushed cheek inches from its crusted eye sockets. She is smiling—a forced but lovely smile—and her right hand is raised in a fist, giving the thumbs-up, as she usually did when a camera was pointed at her.

“I kind of picked up the thumbs-up from the kids in Al Hillah,” Harman said. “Whenever I get into a photo, I never know what to do with my hands, so I probably have a thumbs-up because it’s just something that automatically happens. Like when you get into a photo you want to smile.” There are at least twenty photos from Al Hillah in which she is in the identical pose, same smile, same thumbs-up: bathing in an inflatable wading pool; holding a tiny lizard; standing at the foot of a wall that bears a giant bas-relief of Saddam (the button of his suit jacket is bigger than her head); fooling around with her best Army buddy, Megan Ambuhl, who is giving her the finger and flashing a tongue stud; holding a tiny figurine of Jesus; holding a long, phallic melon; mounting the ancient stone lion of Babylon at the ruins of King Nebuchadnezzar’s city; leaning over the shoulder of an M.P. buddy who is holding a Fanta can on top of which sits a dead cat’s head; and so on.

See video clips, outtakes and other background material here, including Seymour Hersh's original New Yorker article exposing the torture and abuse of prisoners by American soldiers, and later reporting on the "chain of command" and the gray zone" created by policymakers like Donald Rumsfeld to allow vaguely defined "extreme interrogation measures" while preserving plausible deniability for the higher-ups.

ERROL MORRIS: What I find…I mean what I find really interesting about the first letter, is you sort of…you’re addressing all of these questions. You somehow know what you’re seeing is not right, in fact is wrong. There’s something wrong here. The need to take pictures, to expose that fact at some future time to the public, so that they can see another face of America, that’s all, all in that letter. I find that interesting.

SABRINA HARMAN: It seems like stuff like this only happened on TV. It’s not something you really thought was going on. At least I didn’t think it was going on. It’s just something that you watch, and that is not real.

ERROL MORRIS: What does that do to your head?

SABRINA HARMAN: Again, I don’t even know where I was at that point. I put everything down on paper that I was thinking. And if it weren’t for those letters, I don’t think I could even tell you anything that went on. That’s the only way I can remember things, is letters and photos.

ERROL MORRIS: So it’s a way of creating memory?

SABRINA HARMAN: I don’t know what it was. I really think I put it all down to forget, in the letters, and then just to prove what was going on, was the photos. Because really, if anybody came up to you and was like, “Hey, this is what’s going on,” there’s no way anybody would believe what was going on. So that’s why the photos were taken.

ERROL MORRIS: And in fact, there would have been no Abu Ghraib scandal without the photographs.

SABRINA HARMAN: No. Not at all.