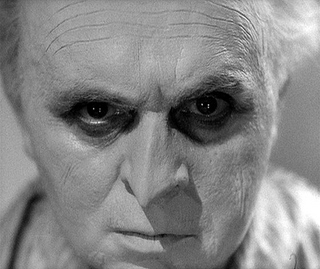 Dr. Mabuse. Like Cheney, the Teutonic arch-fiend controls a vast criminal network while lurking in the shadows. He wields hypnotic power, unnerving subordinates and enemies alike with his implacable demeanor. Called on to surrender in the name of the state, Mabuse cries, "I am the state!" Unlike Cheney, however, he creates chaos intentionally rather than by accident, through the use of incompetent party loyalists and their inbred progeny. Also, he does not hide behind the rule of law, and, again, he never perverts or violates the Constitution of the United States.

Andrew Sullivan is having a contest ("Nixon Without The Conscience,") asking readers to submit "classic movie scenes that depict Cheney." One of the first submissions is this one (after the jump) -- although, above all, I believe it serves as a powerful reminder of what a terrible, amateurish over-actor Tom Cruise has always been -- in this case, especially his right hand. Torture? See if you can watch this without cringing: