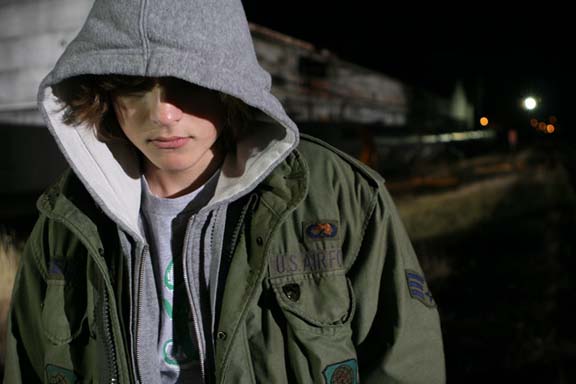 My review of "Paranoid Park" is in the Chicago Sun-Times and on RogerEbert.com. Here's an excerpt:

Many films use scrambled chronology just to make the story seem more interesting than it really is. That's not what happens in "Paranoid Park." The story, told as Alex pencils entries into a lined notebook, is an elliptical record of how he processes the terrible thing that happened one night in the neighborhood of Paranoid Park. The narrative moves in arcs and curves, like the skateboarders who float and glide around in dreamy 8mm slow-motion, as Alex circles the truth in his writing, promising himself, "I'll get it all on paper eventually."

"Paranoid Park" is a companion piece to Van Sant's "Elephant" (his stylized reimagining of a typical high-school day shattered by a Columbine-like massacre) -- and, by extension, "Gerry" and "Last Days" (inspired by the suicide of rock icon Kurt Cobain). Shot mostly in Portland blues and grays by Christopher Doyle and Rain Li, the film takes us inside the gloomy, tormented consciousness of Alex. Like the kids in "Elephant" who negotiate mazes of locker-lined hallways in long, slow takes, Alex moves through space as if he were underwater. He's an outwardly sullen, nearly somnambulistic kid, and there are things going on inside him, weighing him down, that he can't quite grasp, much less articulate....

Next Article: The reviews are in: Let the Funny Games begin! Previous Article: Vegas, baby, yeah!

The reviews are in: Let the Funny Games begin!