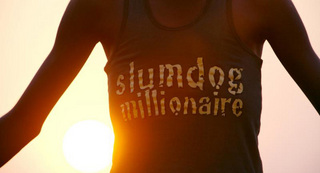 Except... really, was there a worse-directed movie than "Slumdog Millionaire" this year? ("Jumper"? "Speed Racer"?) I didn't get around to watching it until this week because, as I mentioned in Toronto last fall, Danny Boyle has long been on my "Life is Too Short for..." list. But this one seemed unavoidable.

I regretted my decision from the opening sequence, which intercuts an interrogation on "Who Wants to Be a Millionaire" with the eye-candy torture (beating, high-voltage toe-shocking) of a kid who's tied up and suspended from the ceiling -- all with thudding music (just like the TV game show!) and Dutch angles galore. (The television show is black and blue; the torture chamber is orange and red -- all glossy as can be.) This is Danny Boyle, slumming. Like its title, "Slumdog Millionaire" is so picturesquely "gritty" it's oleaginous. Even the cruelty is pristine. Casting is skin-deep: The good characters are pretty, the mean ones are distinguished by cosmetic irregularities, the slimy ones are... slimy-looking. At times it's like watching the reincarnation of Alan Parker.

Not since "Crash" -- or possibly "Mississippi Burning" -- has a movie packaged brutality in slicker, shinier, tighter shrink-wrap. It's asphyxiating. You will never have to worry about what you are supposed to feel and when you are supposed to feel it because the movie will always feed you the answers, then smack you when it's your cue to emote. You can "surrender" completely to the experience (it demands nothing less), and you needn't worry that you will be given an idle moment in which you will be left to feel, or breathe, on your own. This is the kind of mechanical spectacle people like to call an "audience picture," but that's simply because it doesn't allow any space for non-autonomic responses. Don't even get me started on the schematic, dramatically flat structure (game show question followed by flashback to how how the contestant learned the answer)...

Oh, I forgot I wasn't going to comment. Sorry. But, wow, I was unprepared for how much I detested "Slumdog Millionaire."

Stories on reactions to "Slumdog" in India, where it opened Jan. 24:

"Why Slumdog fails to move me" (BBC)

I have no issues with Boyle's cheery depiction of the resilience of slum children and the sunny side of slum life: it is part of the unchanging popular oriental stereotype of poverty equals slums equals dirty, smiling children. Been there, seen that. [...]

I suspect what Boyle tries to do is a Bollywood film -- the dirt-poor lost brothers, unrequited love -- with dollops of gritty realism. But at the end of it all, it is a pretty callow copy of a genre which only the Indians can make with the élan it deserves. The realism skims the surface, and in spite of some decent performances, style dominates over substance.