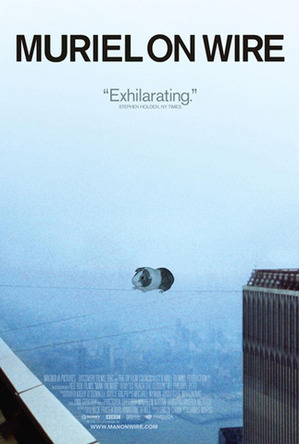 The Muriels are back! Everyone's favorite movie awards, the Muriels feature the longest presentation ceremonies of any other movie awards. They go on for weeks -- from February 16 to March 6. Take that, Oscars! And there are no musical numbers or acceptance speeches, just pithy essays about the winners. Created by Paul Clark and Steve Carlson, and named after Paul's guinea pig, the Muriels are now in their fifth year, and feature some categories that are even newer than before! (They are, in other words, new.)

So, in addition to Best Cinematic Moment, Best Cinematic Breakthrough and retrospective honors from 10, 25 and 50 years ago (plus, this year, a look at the best films of one of the best decades for movies ever, the 1950s), we have... Best Editing. Sure, the Academy has one of those, too (and they say a film can't win Best Picture without an editing nomination), but you won't find a better examination of why the winners deserve to win than this one by Muriel voter Michael Lieberman -- which I feel compelled to quote in its three-paragraph entirety (no editing here!):

Working with a semi-achronological timeline, editors Kirk Baxter and Angus Wall and director David Fincher turn the life of Facebook creator Mark Zuckerberg into something that resembles an open browser window with bookmarked tabs. Zuckerberg's life is seen through the prism of the creation of Facebook; from several court depositions which are edited to feel like one; and the linear trajectory of his life, from a Harvard student to the creator of the most popular social networking site ever.

Fincher's visual palate resembles that of someone preparing an action film, honing in on small moments, such as the conception of ideas or the kinetic energy of keyboard programming; as such, "The Social Network" is one of the most lovely study of surfaces and light of the past year. In The Facemash sequence, for example, shots zig-zag from computer screens to close-ups of faces to the plastics of the technology used to exterior shots of reflections of light on windows. With that, Aaron Sorkin's script, which oscillates between Hawksian verbosity and the incidental moments of the creative process, seems prepared for a Final Cut Pro timeline, a utilitarian sacrifice few writers would consider making.

As we watch Zuckerberg's character editing and perfecting Facebook, The Social Network matches the same pattern as an aesthetic object. The film is about an isolated, determined, and ruthless GenY capitalist, but it's also the essential film about the present day editing process, whether it's editing one's public persona to fit in new media formats or, for the film, finding language and meaning to capture how we live today.

Other honors, for supporting performances and best web-based criticism (voters' sites are not eligible, in hopes that we might teach something about ethics to Clarence Thomas) have already been presented and there's lots more to come, so get over to this year's host, Our Science Is Too Tight, for more about the winners and the runners-up.