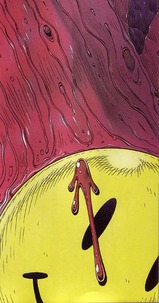 In some editions, the opening shot begins on the cover of "Watchmen": A black oval on a field of yellow with a drop of red liquid splashed on it. ("Bean juice?" "Human bean juice.") The first "shot" proper (comic book, not movie -- though the filmmakers find their own take on it) begins with the smiley in a sea of blood.

The "camera" pulls back from directly above the button. Carried by the flow, the smiley falls into the gutter as the blood pours down a drain. As the camera recedes further we see a man is washing away the stain with a hose. A pair of boots belonging to another, red-headed man carrying a "The End Is Near" sign wade right through the blood puddle and tracks red footprints down the sidewalk. From several stories up, we see a large delivery truck with a triangle on top. This will mean something, but we don't know it yet.

For now, the triangle that most draws our attention are the converging lines of windows down the side of the building that has come into view on the right. The lines point directly to the splash of red. 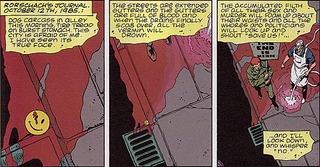 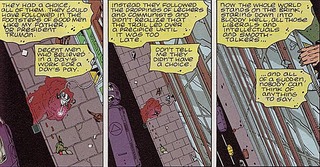 Over all this, we "hear" an entry from October 12th, 1985, in the journal of a sociopath who calls himself "Rorschach," and whose grotesque, tortured, apocalyptic/messianic language owes something to rantings of Travis Bickle: "Dog carcass in alley this morning, tire tread on burst stomach. This city is afraid of me. I have seen its true face. The streets are extended gutters and the gutters are full of blood and when the drains finally scab over, all the vermin will drown. The accumulated filth of all their sex and murder will foam up about their waists and all the whores and politicians will look up and shout, 'Save Us!' And I'll look down, and whisper 'No.'"

(Compare to Travis Bickle, "Taxi Driver" (1976): "Thank God for the rain to wash the trash off the sidewalk.... All the animals come out at night - whores, skunk pussies, buggers, queens, fairies, dopers, junkies, sick, venal. Someday a real rain will come and wash all this scum off the streets.... Listen, you fuckers, you screwheads. Here is a man who would not take it anymore. A man who stood up against the scum, the cunts, the dogs, the filth, the shit. Here is a man who stood up.") 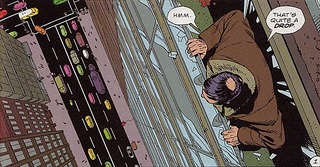 Again, we don't know it yet but the red-headed prophet of doom is this Rorschach character. He knows the man whose blood stains the street. And he's going to make it his business to find out how he splattered his guts all over that sidewalk. "Hmm. Quite a drop," says a detective, looking down, through a shattered window, at what's now just a little red spot far below, like the splotch on the smiley face. (Nice touch: We're looking down on the bald spot on top of his head -- something that, even from this vertiginous height, he can't see. There's always a higher level...)

"Watchmen" is about scale and proportion and perspective: Small details seen up close (in some cases really small ones -- so small they barely qualify as events at all); gigantic ones seen from a cosmic point of view. The infinitesimal and the infinite, the miracle of a single life and of all creation; the mystery of the human heart and the mysteries of the universe; the intelligence of man, and the intelligence of a termite. That's a lot to put into a comic book. Even a whole series. And to get into a movie that's only 15 minutes longer than "The Dark Knight"...

We'll see the smiley face -- a sardonic rictus, symbol of The Comedian, the masked superhero who met his end when his body met that pavement -- again. On Mars. (And, in the movie, a Rorschach version in the snow of Antarctica: What do you see? A pretty butterfly?)