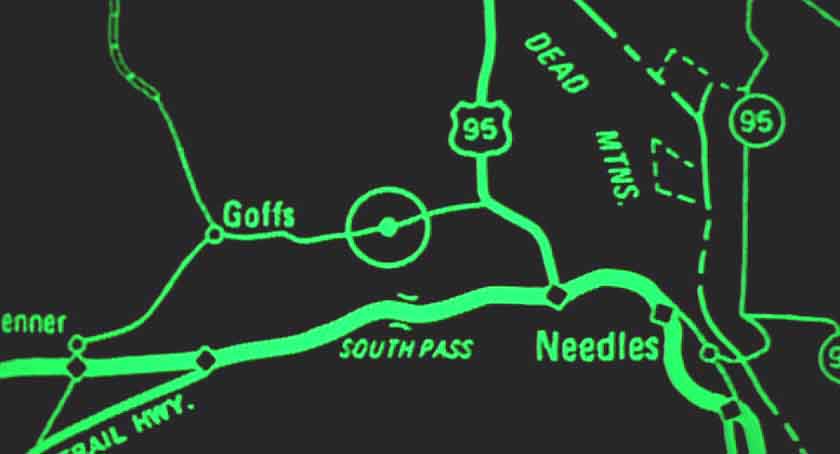 Down a desert road the car ambles erratically, while the motorcycle-cop watches from the far side of the road. Lapsing, perhaps, four seconds and consisting of a 180-degree pan that follows the car as it heads toward and passes the camera and police officer, it's not a terribly long shot -- but it perfectly encapsulates the film, "Repo Man," that follows. 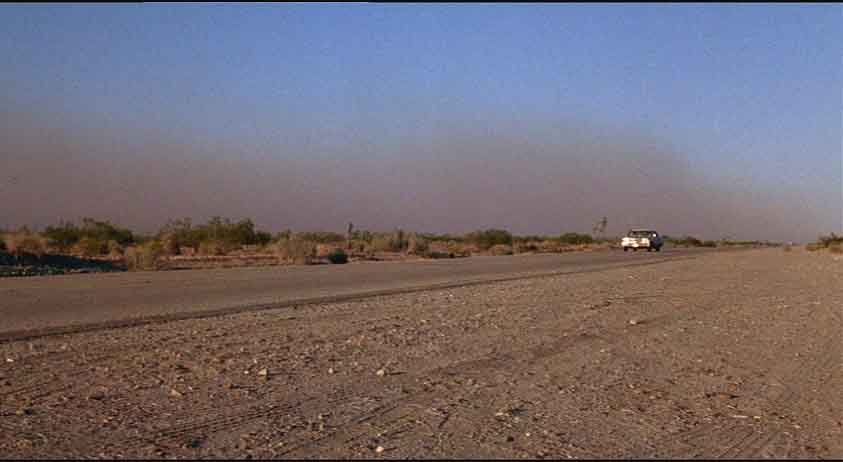 A synthesized sound and clanging industrial rhythm accompany the automobile's desultory progress. The music that scores the first shot, like the jagged, punk rock guitar played over the credits, creates a sense of dread -- an undercurrent of menace -- that complements the bizarre Chevy Malibu. Music is integral to this scene (and the movie), establishing a sense of tension that might have been otherwise lost. Listen to the thrumming electronics and the rhythm vaguely reminiscent of heartbeats. This atmospheric touch tells us that something's not right. This auto is not swerving as the result of an intoxicated driver -- or rather the result of a driver intoxicated by the typical substances -- it's the result of something unknown and alien. 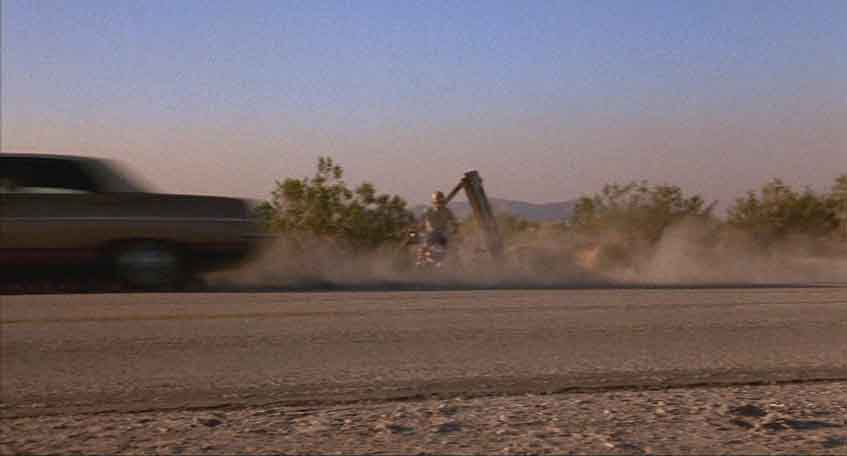 The audience is set up for the film that follows: a surreal and slightly sinister chase for an old Chevy. Another aspect of the shot clinches it for "Repo Man" offering one of the best and most appropriate cinematic openings: the movement of the car itself. How have I described its motion? Desultory, erratic -- I should also add forward. Like the story that tracks its movements, the Malibu wanders hither and thither but maintains general forward momentum toward some discernible end. There will be slight detours but they never take us far off course and, frankly, make the narrative a more "scenic" trip. 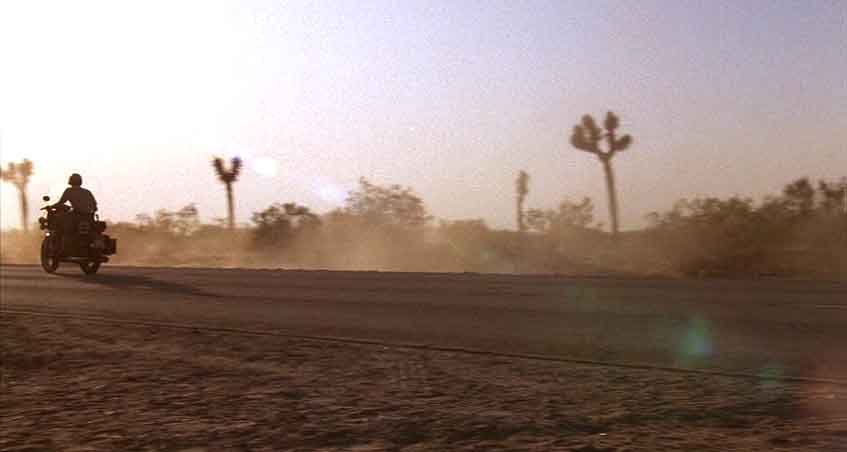 Is this my favorite opening shot? Probably not. But I do like it, and the shot definitely provides a portal for the audience into one of my favorite films and one that I feel is unjustly saddled with an adjective that sells it and the talents of its writer/director/cast short: "cult." 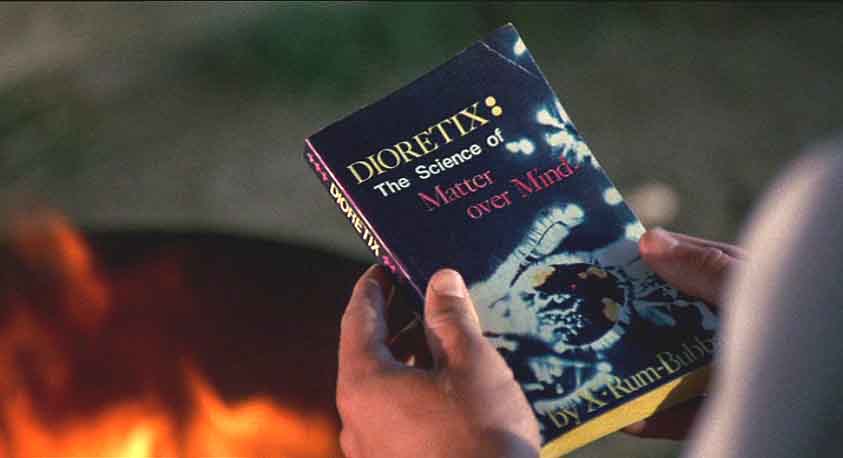 A piece of the cosmic unconscious -- into the fire.

JE: This is one of those films that's just part of the fabric of my being. First, there's that Iggy Pop surf-n-turf riff and the credits sequence that traces a journey on a monochrome-monitor green map from Los Alamos, through Arizona and over the border into California, where we're slammed down onto a secondary road off Highway 95 between Needles and Goffs. The camera in the opening shot, like the map under the titles, moves right to left, east to west. We know precisely where we are (geographically speaking) and yet the world of the film can be described as Generic Southwestern Hellhole. 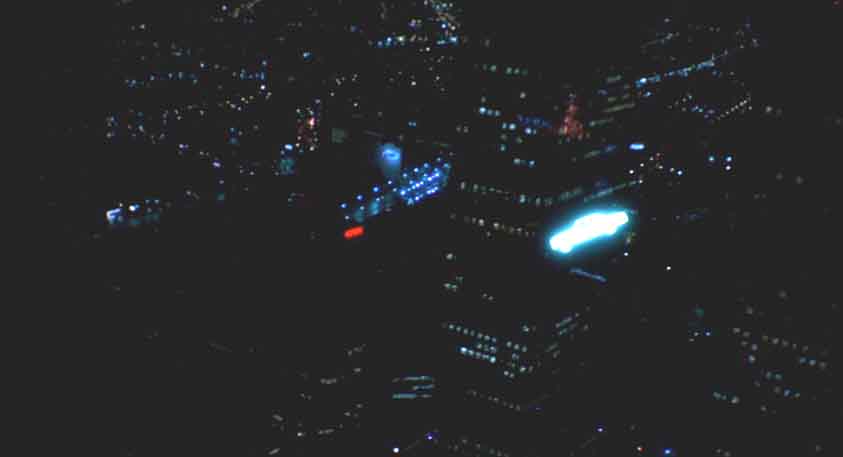 Forward... into the past!

We know from the title it's a movie about cars, and the currency of the film is transportation (rides). It opens with a car traveling from Los Alamos, suggesting irradiation of some kind (the cop in the first shot rides right into the sun, foreshadowing -- or "forelighting" -- things to come), and ends with classic '50s science-fiction B-movie shots of a glowing green car/UFO zooming over downtown LA. How do we get there from here? Perhaps by tracing the "lattice of coincidence" the great Tracey Walter (vet of many a Jonathan Demme picture) describes in one of the movie's most memorable speeches....

Universal dumped this movie after a brief and ignominious LA release. They wouldn't even screen it for exhibitors. I had to book it into the Seattle International Film Festival and that became the exhibitors' screening in Seattle. Fortunately, a few people at the newly formed Universal Classics liked the movie, and it played a successful run in Seattle in the summer of 1984.

I love this movie so much that I used to have Harry Dean Stanton's coke-fueled "repo code" speech ("Not many people got a code to live by anymore!") as my outgoing message. One day I came home and heard it playing back to me as an incoming message, which I found quite confusing -- until Harry Dean himself started laughing. Somebody at an LA indie distribution company had told him about my answering machine, so he called to hear it for himself, and started speaking the "code" back to the machine! Talk about a lattice of coincidence...

BUD: I never broke into a car, never hot-wired a car, kid. I never broke into a trunk. I shall not cause harm to any vehicle nor the personal contents thereof, nor through inaction let that vehicle or the personal contents thereof come to harm. That's what I call the Repo Code, kid. Don't forget it, etch it into your brain. Not many people got a code to live by anymore.

Hey, look at those assholes over there. Ordinary f----in' people, I hate 'em. 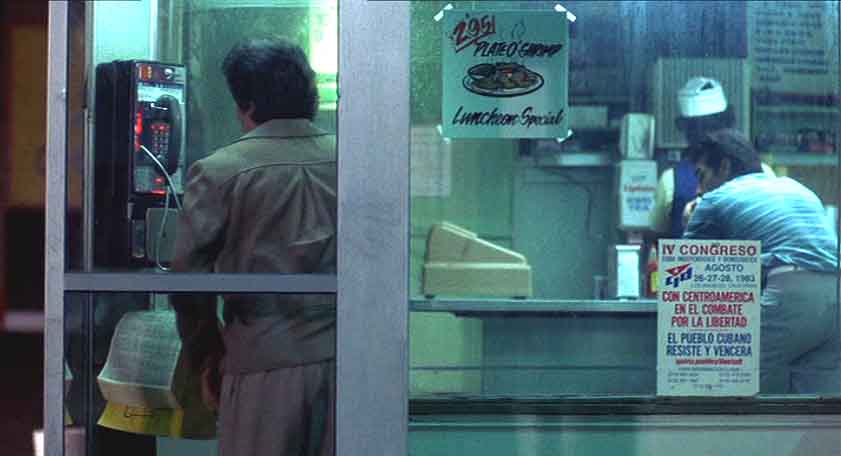 MILLER: A lotta people don't realize what's really going on. They view life as a buncha unconnected incidents and things. They don't realize that there's this, like, lattice of coincidence that lays on top of everything. Give you an example; show you what I mean: Suppose you're thinkin' about a plate o' shrimp. Suddenly someone'll say, like, plate, or shrimp, or plate o' shrimp out of the blue, no explanation. No point in lookin' for one, either. It's all part of a cosmic unconciousness....