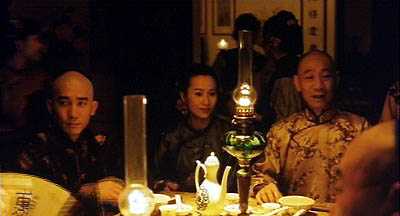 "Flowers of Shanghai" (1998), by Taiwanese filmmaker Hou Hsiao-hsien, has an opening shot that lasts — I kid you not — eight minutes! Jazz bassist Marcus Miller once said about James Brown’s music that no matter how small a piece of it you took, like DNA, it had the “funk in it." That’s how I feel about this shot: it contains, in its eight minutes, the entire film.

The camera is an observer at a table in a 19th century Shanghai brothel or “flower house," where several clients are playing a drinking game. Most of them are young, dressed in dark and gleaming silk robes. The only light in the shot is provided by a couple of curved lamps. (In fact, we will discover that the film will never venture outdoors.) Next to the patrons, standing, are their “flower girls." Every now and then, promptly but gracefully, they light opium pipes or pour wine for their clients. Like a plaintive sigh, a melancholic melody-drone accompanies the shot.

The players interrupt the game to tell stories and jokes; their courtesans discreetly add details that contradict or modify the stories. Though the women respectfully hover in the background, immaculately dressed and elegantly comported, they are not wallflowers. Their polite retorts and whisperings, and their bemused but respectful give-and-take with their patrons, hint at the play of power relations that will constitute the story. One man — Tony Leung, the protagonist — sits silently and expressionlessly, observing this slice of dinner-table theater.

The camera is not stationary but moves almost imperceptibly, swiveling from side to side, organically and not schematically, the better to catch this nuance of conversation or that movement of figure. Finally, the shot fades slowly to black in mid-action, as if to say “the flux of life will continue here, but let's leave now and return another day just like this one." Fade-in: the film’s title.

JE: Wow, Girish -- beautifully written. I can't wait to catch up with this one!