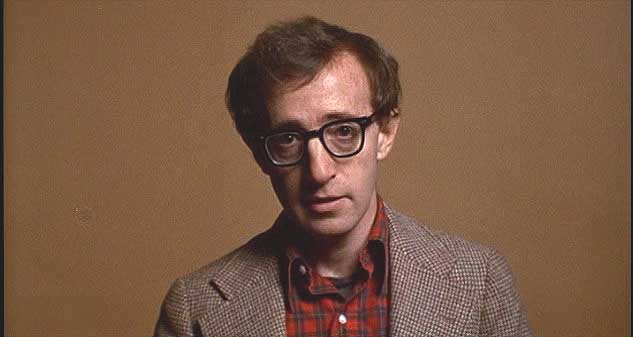 If a movie's opening shot provides the compass with which to navigate the ensuing film, then this simple set up needs commending. Unexpected, efficient, and funny from frame one (relying as it does on the "Woody persona"), this fourth wall-breaker immediately establishes the anything goes storytelling so unique to "Annie Hall."

JE: Good one, Hiram. The shot doesn't have to be complicated (or even long) to do what it has to do. This shot from "Annie Hall" not only sets up Alvy's profession and character (a writer and stand-up comedian with an anhedonic view of life), it establishes him as the narrator even when he's offscreen. (Seinfeld would later borrow the device of having the story grow out of the framing device of Jerry's monologue.) We'll return to this shot near the end. And, of course, Alvy (and other characters) will break the fourth wall at key moments in the movie (most memorably in the Marshall McLuhan scene with the pompous guy in the movie line), reminding us that this is Alvy's subjective take on his relationship with Annie. As he illustrates, she sees things quite differently. Here, for the record, is what Alvy says to frame the funny valentine to the girlfriend he can't quite get over:

ALVY There's an old joke. Uh, two elderly women are at a Catskills mountain resort, and one of 'em says: "Boy, the food at this place is really terrible." The other one says, "Yeah, I know, and such ... small portions." Well, that's essentially how I feel about life. Full of loneliness and misery and suffering and unhappiness, and it's all over much too quickly. The-the other important joke for me is one that's, uh, usually attributed to Groucho Marx, but I think it appears originally in Freud's wit and its relation to the unconscious. And it goes like this-I'm paraphrasing: Uh ... "I would never wanna belong to any club that would have someone like me for a member." That's the key joke of my adult life in terms of my relationships with women.

Tsch, you know, lately the strangest things have been going through my mind, 'cause I turned forty, tsch, and I guess I'm going through a life crisis or something, I don't know. I, uh ... and I'm not worried about aging. I'm not one o' those characters, you know. Although I'm balding slightly on top, that's about the worst you can say about me. I, uh, I think I'm gonna get better as I get older, you know? I think I'm gonna be the- the balding virile type, you know, as opposed to say the, uh, distinguished gray, for instance, you know? 'Less I'm neither o' those two. Unless I'm one o' those guys with saliva dribbling out of his mouth who wanders into a cafeteria with a shopping bag screaming about socialism.

Annie and I broke up and I-I still can't get my mind around that. You know, I-I keep sifting the pieces of the relationship through my mind and-and examining my life and tryin' to figure out where did the screw-up come, you know, and a year ago we were... tsch, in love. You know, and-and-and ... And it's funny, I'm not-I'm not a morose type. I'm not a depressive character. I-I-I, uh,

you know, I was a reasonably happy kid, I guess. I was brought up in Brooklyn during World War II....