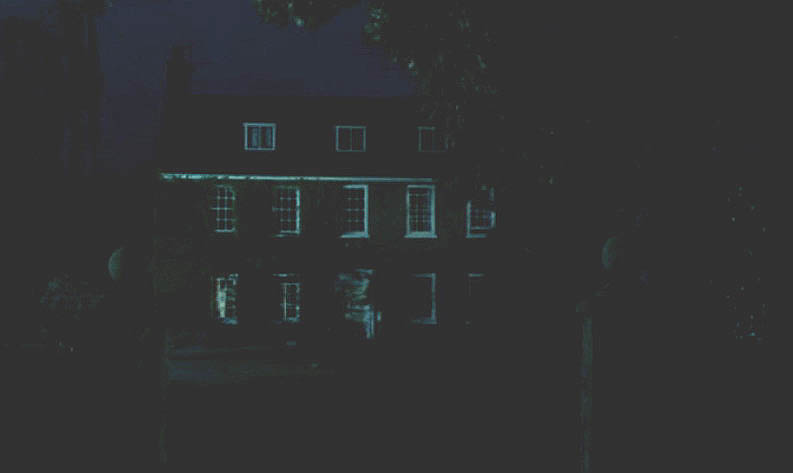 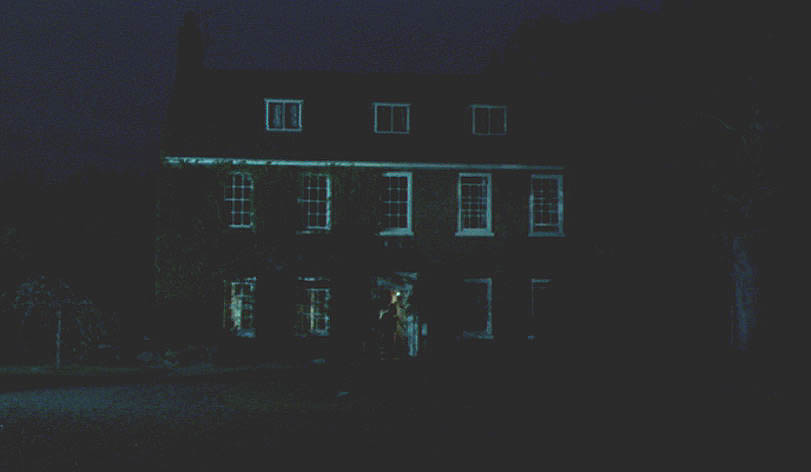 ... and ends here. And nearly everything that happens, except for a slow movement in on the house, happens off-screen.

The opening shot of Joseph Losey's "Accident" (1968) begins under the main-title credits and runs for a minute or so after they have concluded. We're looking at the front of a good-sized but hardly palatial house in the English countryside -- the home, as it happens, of an Oxford don whose academic career has been less than stellar. It's nighttime, tangibly well into the wee hours. No lights are burning, no activity within is apparent. The credits roll without musical accompaniment. On the soundtrack we detect an airplane passing overhead; onscreen, a slight alteration of perspective on the surrounding tree boughs makes us aware that the camera is slowly nudging closer to the house. After a moment, there is the sound of an automobile approaching. The noise grows loud; the engine is racing. Then, a screech of tires and the sound of impact and shattering glass, abruptly cut off. There is a further pause. Then the front door of the house opens, only a hint of light glimmering in the interior. Hesitantly, a man steps out, then begins advancing into the night. Cut to several murky shots impressionistically marking his progress as he moves toward the scene of the titular accident.

The shot, though plain as, uh, day, is remarkable for several reasons. One, of scant concern to most of us, is that with it the director and his first-time cinematographer Gerry Fisher achieved their goal of shooting a color scene that actually looks like what it's supposed to be: a nighttime exterior as seen by moonlight, rather than a day-for-night fakeroo or some other conventional attempt to imitate nighttime via filters and technical trickery. Losey and Fisher went to extreme pains with the film lab to get the shot to look exactly as they wanted it -- even though, as Losey ruefully observed in interview, they knew most theaters would bathe the screen with mauve houselights for the benefit of late-arriving seat-takers, and in any event a few passes in front of the projector's carbon arc would soon alter the image on the emulsion.

So, technically, a real, if effectively unnoticed and ephemeral, coup.

On another front, the shot is notable because it quietly but emphatically establishes The Beginning of Something. The house will, in fact, become the principal, though far from only, location in the film, and it's important that we feel it as the center of things. We shall realize, after a few minutes of screentime, that the night of the accident marks very nearly the end of the events the film narrates. One of the most important characters has perished in the car crash, and two of the other four most important characters are soon to play out their final scene together. The impressionistic montage of the householder, the Oxford don (Dirk Bogarde), moving through the woods keys the movement of much of the film to follow -- jagged bits flung at us abstractly or in keeping with the distracted sensibility of the protagonist. Some actions will be experienced more than once, compressed or seen from different perspectives. The quiet stability of the opening, however fraught with portent and suppressed forces of destruction, lingers in memory as a kind of anchor for us.

And of course, as is the case with so many classically fine films, the opening will be echoed in the film's end. Again we are looking at the housefront from approximately the same distance and perspective, though at end of day rather than dark of night. Again the don will pass through that front door -- but going into the house, and not alone this time, but gathering in his children for suppertime. The children are a nice touch, not only as an index of domesticity (they don't really figure in the story as characters) but as a grotesque reflection of the "children" -- two of the don's university students -- whom he was in fact waiting for in that house at the beginning of the movie. There is even a child's miniature car sitting on the driveway as an ironical echo of the real automobile totaled in the accident.

Although little remembered over the intervening decades--and maddeningly misunderstood by many of the reviewers who shrugged it off -- "Accident" is one of the great modern films. It does something that, almost by definition, most movies do not do: again and again it presents us with scenes in which Nothing Happens ... or, to speak more precisely, Something might have happened, almost happens, yet fails to. It goes without saying that, in so doing, "Accident" defines a quality that most of us experience, with dispiriting frequency, throughout our own existences.

This goes well beyond the facts of the plot: that Bogarde's character is frustrated in both his career and his marriage (to a woman played by Vivien Merchant, wife of key Losey collaborator Harold Pinter); that he resents and envies his best friend, another don (Stanley Baker) who enjoys some cachet as a writer and also has his way with a lot of ladies (perhaps including Bogarde's wife); that Bogarde can't make a move on the exotic, enigmatic "princess" character (Jacqueline Sassard), his student, who often seems to be inviting it; etc. Thanks to Losey's direction, Pinter's insidiously Pinter-esque screenplay (from Nicholas Mosely's novel), and the subtle playing of a very fine cast (which also includes Michael York in his screen debut, Delphine Seyrig, Alexander Knox, and Pinter himself), scene after scene trembles with potentiality that is cruelly short-circuited or allowed to dwindle away like the light on a distant hill. This scene, this moment, this place, this composition is where Something might have happened.

Which is why, at the end of the movie, the Bogarde figure goes into the house and closes the door--and even when the roaring of the accident is repeated on the soundtrack, he doesn't open it again. There is no story left to happen. The possibilities have all been used up.

One final note: We spoke of the pains Losey and Fisher took with exposing their opening scene. In shooting the final scene in the last light of afternoon, the production ran into a little problem. There was another member of the family meant to enter the house with Bogarde and the children: the family dog. For whatever reason, the pooch balked at the doorway and wouldn't go in. Bogarde lingered for a second, making one last entreaty, then closed the door because he feared losing the shot. Losey, alongside the camera, called out to the dog to get it out of the frame. And so in the finished film the dog turns and runs toward and past the camera ... just as the accident noise reaches its crescendo and we hear the crash. Many viewers left the theater assuming that this caused another, for-real roadway mishap instead of the symbolic echo of the opening that Losey intended. Accident indeed.

And, by the way, it wasn't easy to get those frame grabs to look right, either!