On the devaluation of monsters... and movies 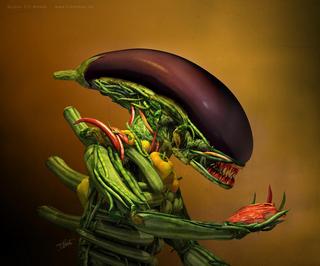 Now we no longer populate these movies with humans but with fodder. We've learned how to show the Monster but forgotten how to show people, and they become increasingly flimsy, predictable and mawkish -- to stare at them too long is to get bored while waiting for them to be eaten. Instead we fetishize the Monster, and in staring at it too long, it loses its power too -- everything has its depth stripped away, nothing means anything, and we've diffused or at least ignored our fears by shining a flashlight on every menacing shadow in the room. These movies have lost the capacity to connect to any real fear, and instead only appeal to our infantile desire to break our toys against each other.

Spectacle has been diminished in the name of "showing everything." Just because it can be shown, doesn't mean it should be. A movie with all "money shots" has no climaxes. It just neutralizes itself. The rules of storytelling apply to CGI: if anything can happen, then what's the significance? Today's CGI, when noticeable as a "special effect," plummets fatally into the uncanny valley. It's so pristinely close to photo-"real" it looks utterly fake.

(image by Till Nowak)