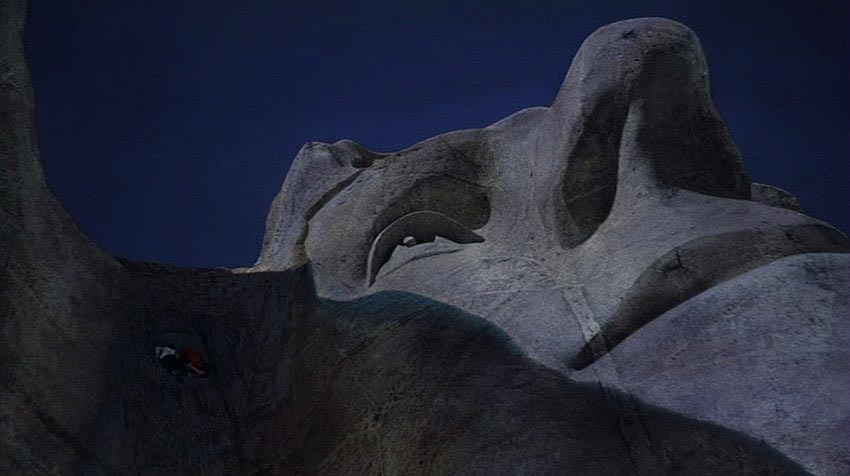 An extreme close-up -- up Thomas Jefferson's nose, that is. Wee Roger O. Thornhill and Eve Kendall are in long shot.

For the Close-Up Blog-a-thon at The House Next Door:

When is a long shot a close-up? When it's part of an Alfred Hitchcock cliffhanger sequence on Mount Rushmore in "North by Northwest" (1959), that's when. 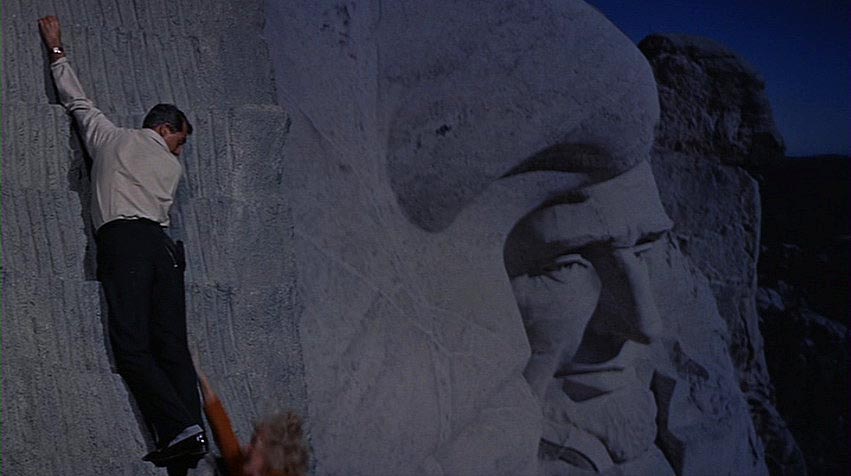 Full profile of Roger on right, as Eve drops right out of the bottom of the picture. The most prominent facial feature in the shot is Jefferson's schnoz (this could almost be microphotography, if you thought of it on that scale), with Abe Lincoln looking on in semi-Bergmanesque three-quarter profile from below his predecessor's nostril. 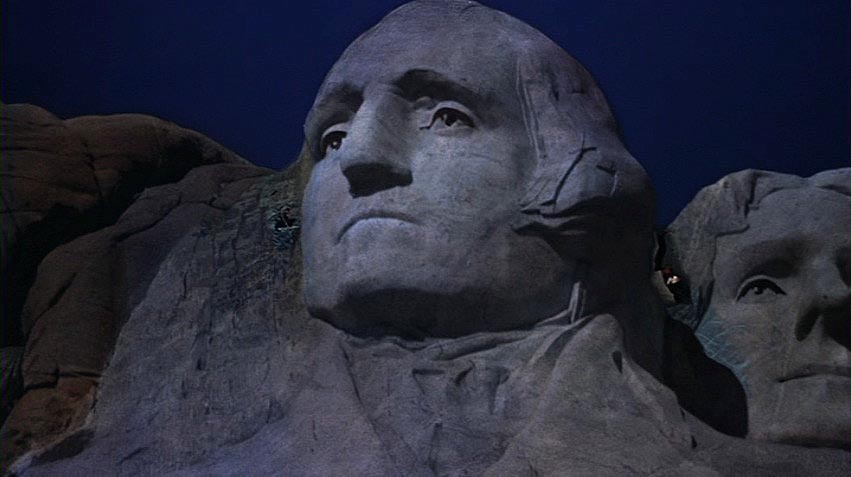 Mr. Washington is ready for his close-up now, with a teeny henchman standing to the left of his cheek and miniscule Roger and Eve hanging out between him and Jefferson. 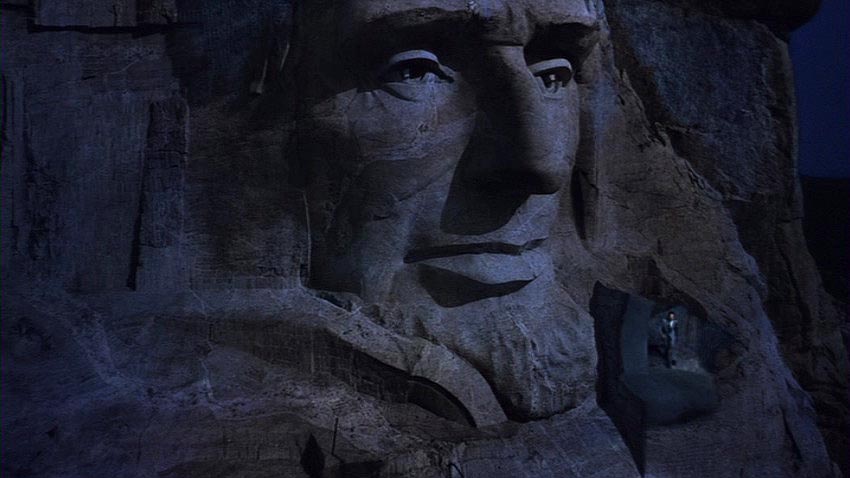 Mr. Lincoln. And Leonard. (That would be a tiny Martin Landau.)

Hitchcock is having so much fun with scale and perspective here that I chuckle with delight (even as I tense up) every time I see the, uh, climactic sequence, which ends with an insertion shot -- both long shot and close-up, depending on how you look at it -- that's so naughty, so pornographic it will have to wait until after the jump.... 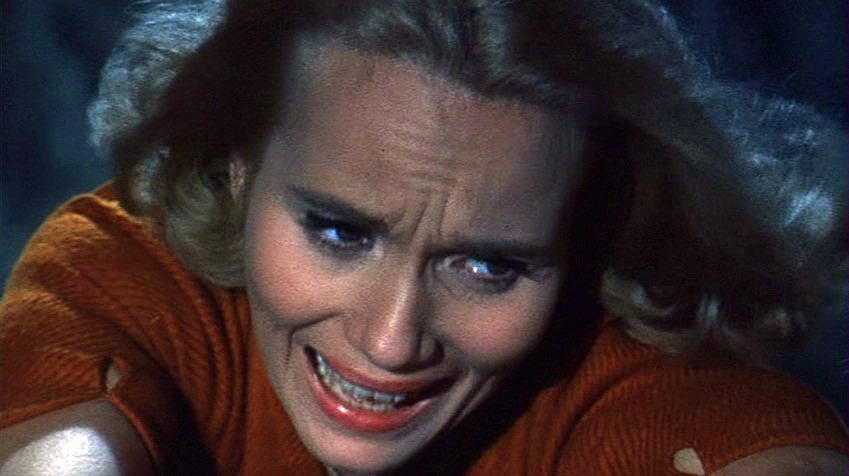 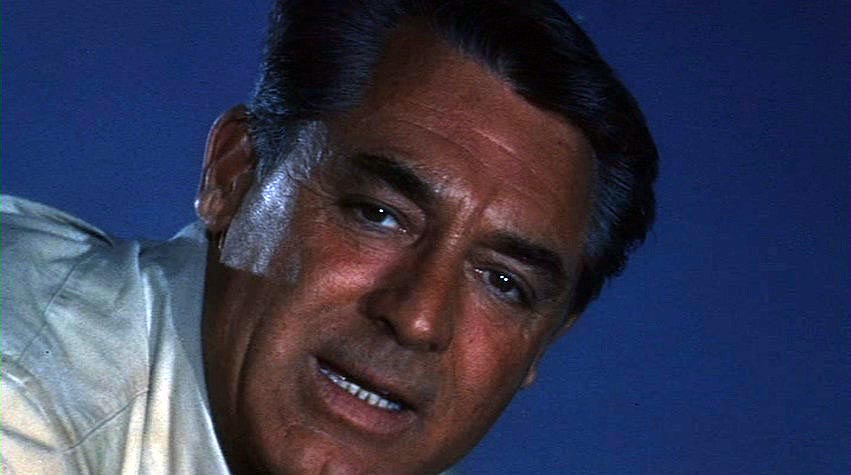 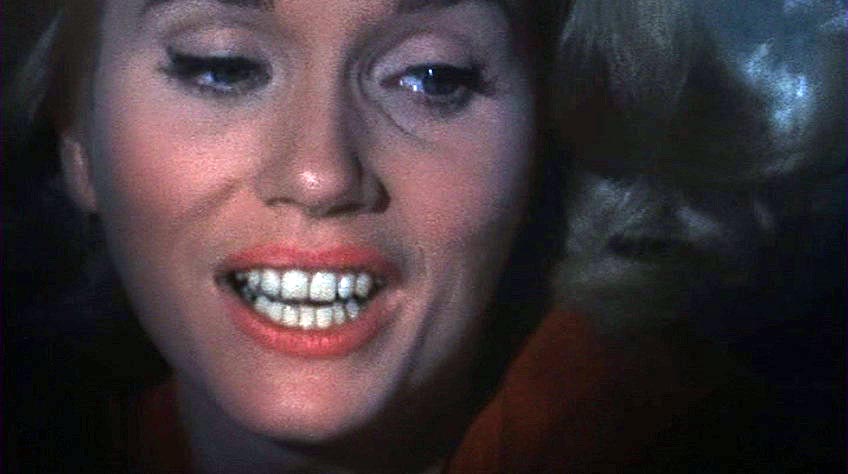 Eve: "Pull harder!" Something is off-kilter here. The shot has gone dark and blurry around the edges. 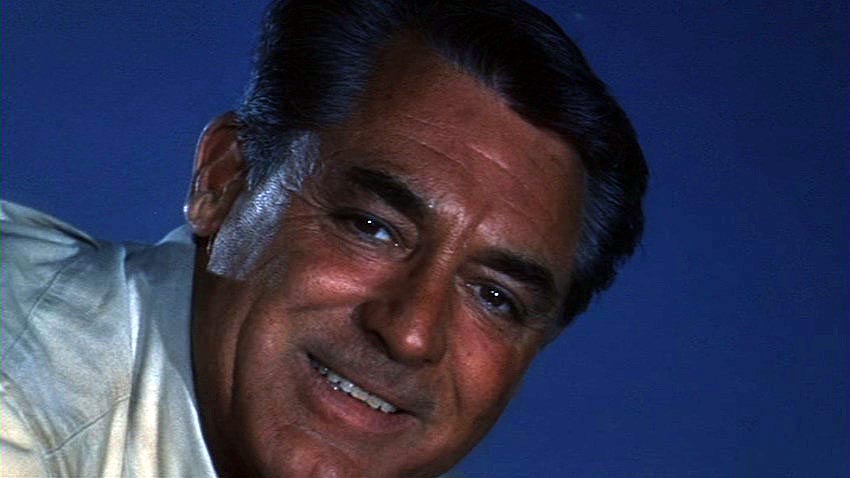 Roger: "Come along..." Why is he smiling? And why don't his words match his lip movements? 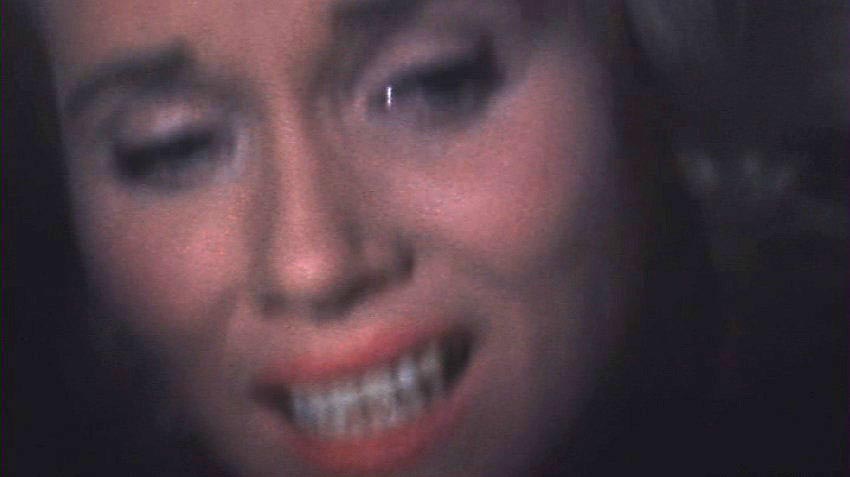 Roger O. Thornhill ("ROT," played by Cary Grant) pulls Eve Kendall (Eva Marie Saint) up the cliff and into bed, so that she becomes "Mrs. Thornhill" in a matter of seconds, in the course of two quick close-ups and a pull-back. The ever-tightening close-ups of Eve are used to disorient the viewer -- there are a couple seconds where you're in a confused into a sort of dream state -- and fuzz the transition from Rushmore into the train compartment (scene of an earlier dizzying kiss). But with each close-up we feel Roger and Eva getting closer (she tells him to "pull harder") until he pulls her right into the shot (and their honeymoon bed) with him. They are united within the same frame as man and wife. And they seem pretty tickled about it, too. Roger even gets a little halo above his head from a light fixture. Or is that just an "O" for his middle name, which stands for "nothing"? 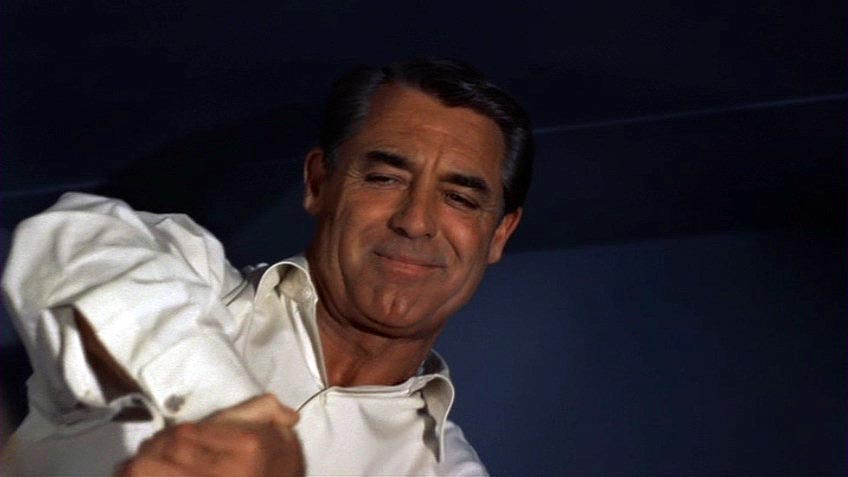 Begin pull-back. The bluish background behind Roger is almost the same... 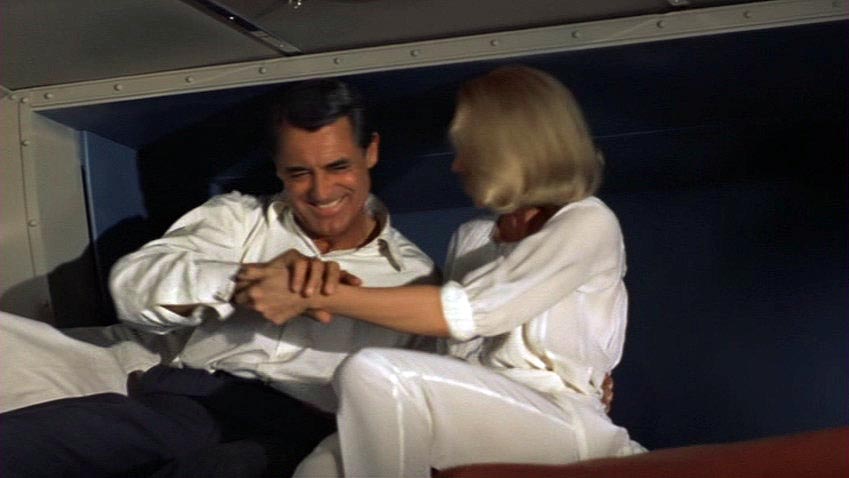 Eve climbs into bed with Roger. 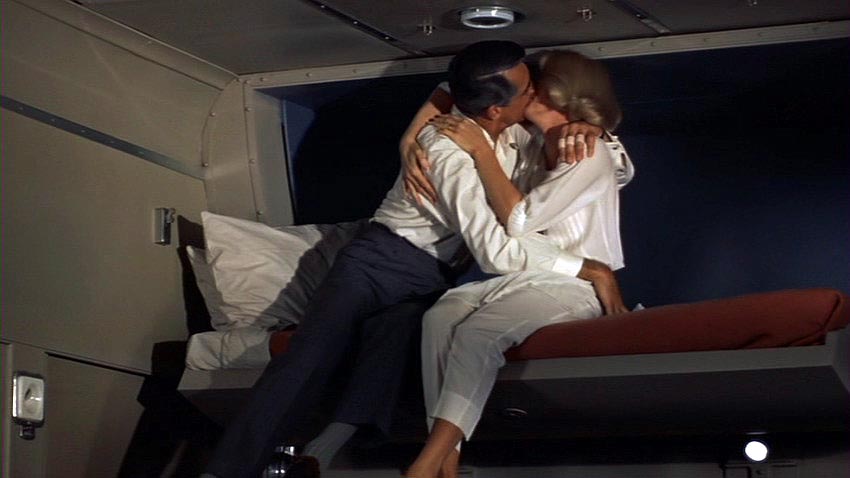 We knew they were going to get down off of Washington's neck somehow. Hitchcock doesn't bother to show us because it really doesn't matter. Time to wrap things up. He left Jimmy Stewart hanging at the end of the opening sequence in "Vertigo," but this time the transition has a visual logic ("pure cinematics") intended to be emotionally satisfying, not unsettling -- plot details be damned. 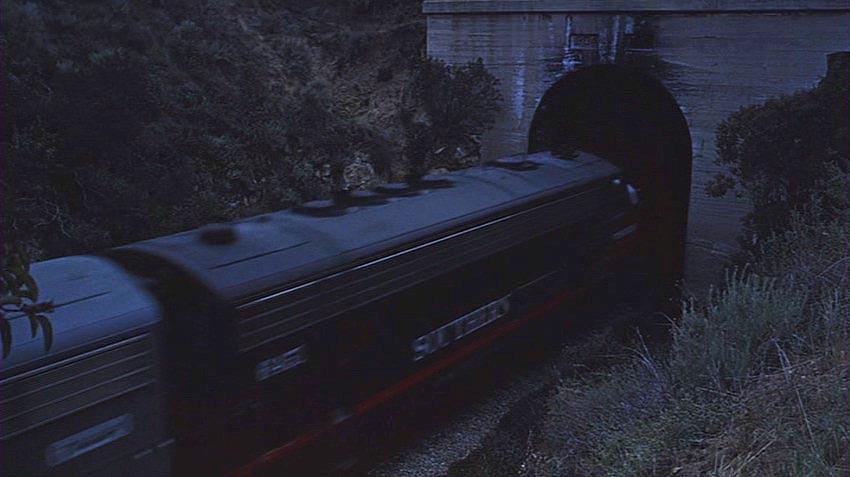 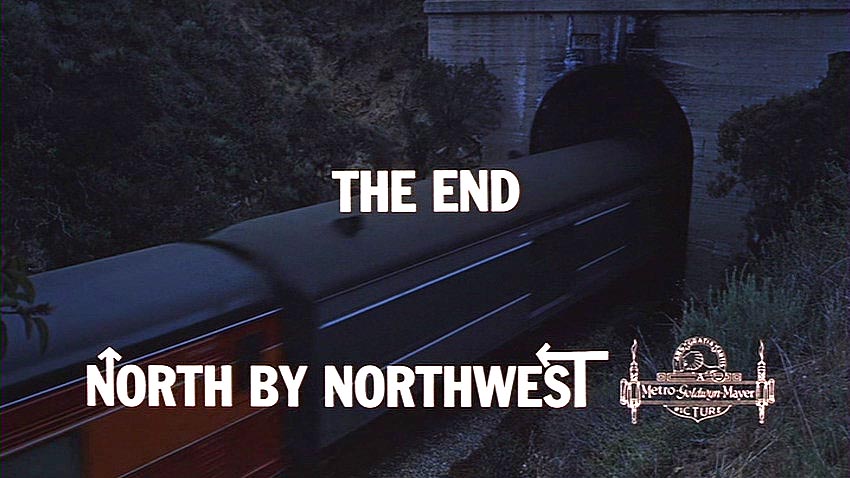 Silly? Sentimental? Hitchcock seems to have something a little racier in mind. You can interpret for yourself what those arrows on the title lettering, the train, the tunnel, and "The End" signify. But if this final extreme "close-up" doesn't make you laugh, you're not getting into the cocktail spirit of the movie.