Nite Owl versus the Bat Man 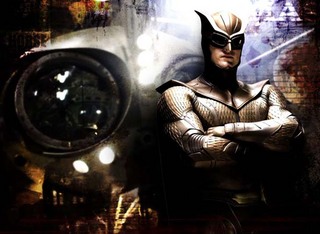 "After the revelation of "The Dark Knight," here is "Watchmen," another bold exercise in the liberation of the superhero movie. It's a compelling visceral film -- sound, images and characters combined into a decidedly odd visual experience that evokes the feel of a graphic novel. It seems charged from within by its power as a fable; we sense it's not interested in a plot so much as with the dilemma of functioning in a world losing hope." -- Roger Ebert, RogerEbert.com

"This movie delivers as a splashy, bloody comic-book adventure that stays true to its roots without being slavish about it (despite numerous images taken directly from the comic's pages). It's both headlong and thought-provoking, attacking the notion of heroism and the role of the hero in society in ways that 'The Dark Knight' only talked about." -- Marshall Fine, Hollywood and Fine

Let's get the unavoidable DC Comics-based superhero movie comparisons over with: Despite superficial affinities (masked marvels, super-hype), "The Dark Knight" and "Watchmen" could not be further apart in style, ambition, or their approach to storytelling. One is set in a photorealistic Gotham City, shot on location in Chicago; the other in a sprawling fantasy universe that encompasses places called "New York," "Antarctica" and "Mars," but that exists only in the imagination. One takes place in a specific window of time; the other in a distorted, alternative 1985 (Richard Nixon is serving his fifth term as President of the United States) that re-invents the past and the future so as to turn the very concept of "time" inside-out. One is a mechanical, plot-driven action movie, edited in a woodchipper; the other is a dystopian science-fiction satire that doesn't so much spin an intricately tangled web of interwoven stories as create an environment in which its various elements are set bouncing off one another in perpetuity. ("Nothing ends...")

(Below: One of many period influences on "Watchmen" -- Ridley Scott's famous 1979 Chanel No. 5 commercial. It's still the director's finest work.)

Yes, I believe "Watchmen" is cleverly designed especially for people who have read the graphic novel -- and I'm very glad I re-read it the week before seeing the movie. Instead of feeling like I already knew was "going to happen," I felt a quickening sense of anticipation over how (or if) what I thought was going to happen was going to happen. I found myself mostly delighted by the multifarious choices the film was continually making, many of them playing on those very expectations with a subtle wink or a nod.

The famous opening shot, for example. It's not the opening shot of the movie, but it's in there, with a couple little twists. The folks who are seeing an obsequious recapitulation of the graphic novel simply don't remember what was really in the graphic novel. That the movie has convinced them it has simply illustrated the comic-book as if it were a series of storyboards is, I think, a sign that the film version has re-interpreted the paper-bound version in cinematic terms. (It was writer Alan Moore -- you know, the guy who hates all comic book movies and gives so many interviews about it -- who said he tries to do things in his work that wouldn't translate to film, which is why he won't allow his name to be associated with any of them. Except in all those interviews he gives.)

So, although I was conscious of scenes and images and moments that I was looking forward to, I rarely felt I knew precisely what would come up next. Besides, the film revises the ending significantly (and improves on it) -- and condenses and conflates and omits and elides moment by moment, shot by shot, as any nearly three-hour movie of a nearly 400-page graphic novel would have to. Some things that are in the foreground of the comics are woven into the background of the movie. (The "Black Freighter" and "Under the Hood" stories are now available on DVD, and will be re-integrated into an extended version of "Watchmen" for home video.) It's probably possible to connect all the dots in the plot, but to do so would be as silly as trying to outline the "story points" in an Oriental rug.

So, you may find yourself wondering what the hell is happening during "Watchmen," but that's built into the very nature of the experience -- and it should elicit an appreciative smiley-smile rather than a frustrated frown. You don't feel (as I sometimes did in "TDK") that you're in the hands of a movie that just isn't very competently made. There's no question this picture knows exactly what it's doing and that it respects your ability to put the parts together. You do not have to wonder what the hell is going on between shots (why is that over there now?) because the movie's seams are showing.

Some are saying "Watchmen" has been storyboarded within a micrometer of its life, that it's too slow and deliberate, "too reverent" in its attempt to re-create the comics on the screen and therefore feels like it's been "embalmed" (clever Egyptian reference, that). OK, if that's the way you see it. Not me, though. I was, for the most part, entertained and provoked and amused by a work that stimulated my eyes and my mind, not just my reflexes. I think both Marshall Fine and Roger Ebert make excellent points in what they say above. "Watchmen" is conceived and crafted as an immersive experience, not merely a script that has been illustrated-by-cinema almost as an afterthought.

Let me put it this way: There's a shot of a swinging bathroom door in "Watchmen" (one of countless images that is not taken from the comics), that is imbued with a visual wit, a love of movies, that makes you laugh with delight even as you cringe. I watched "Watchmen" with a big smiley face on the front of my head almost all the way through. It's consistently funny, though not necessarily in a guffaw-out-loud way. Think "Dr. Strangelove," subject of humorous references that, like many things you'll recall from the movie, feel like they had to have been in the comics, but aren't.

Much of the pre-release debate about "Watchmen" has come down to whether it can satisfy passionate "fanboys" and be popular enough to turn a profit, given that it's basically an ultra-violent, R-rated, political satire/philosophical essay with ludicrously retro-cartoonish masked psychopaths, breast nudity and an ambivalent ending that intentionally refuses to satisfy. Will women want to see it? Will parents take their kids? I have no interest in those questions. But now that we've got that "TDK" stuff out of the way (and it is quite possible to appreciate both movies for different reasons), I'm very interested in continuing to explore what it means to actually watch "Watchmen"!