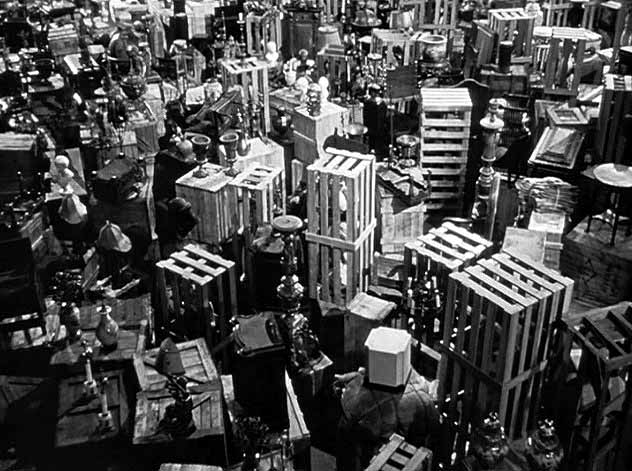 Lost treasures of Xanadu -- in a Pennsylvania warehouse?

For five years now, one of the great film resources in America has been unjustly imprisoned, boxed up and sitting in the corridors of a film storage facility in Hamlin, Pennsylvania. It's a scandal, a tragedy, and an enormous disservice to film scholarship. In a recent e-mail, Mary Corliss, creator and curator of the Film Stills Archive at the Museum of Modern Art, the source of images for countless film-related books and publications (Corliss is also the stills editor for both Roger Ebert's "Great Movies" books), brings us up to date on the struggle to make this invaluable treasure accessible again:

I have been remiss in sharing the final chapter of the [National Labor Relations Board] vs. MoMA saga with all of you who supported me and Terry Geesken after our abrupt lay-offs and the closing of the Film Stills Archive in January 2002. This September, I received a document signed by the three Republicans appointed to the Washington office of the NLRB. (The Democratic minority on the panel was not represented). In their ruling, they not only fully agreed with MoMA's arguments; they reversed those points that the judge in the NLRB trial had decided in our favor.

Essentially, they found MoMA's decision to close the Film Stills Archive to be solely the result of the Museum’s need to reduce services and spaces during its $850 million expansion, and not a personal retaliation for our union activities. That verdict represents the end of the legal battle.

But the struggle to keep the Stills Archive alive does not, cannot end there. Since MoMA argued that the Archive was closed for temporary lack of space, it follows that, when even more space was made available, the Archive would reopen. That was Terry’s and my understanding when we took a low severence in order to have recall rights to our jobs of 34 and 18 years, respectively, returning when the Archive reopened. In other words, the future of the Archive bore no relevance to the disposition of the NLRB case.

The renovation of the main Museum was completed two years ago, and this week MoMA unveiled its 63,000 sq. ft. Lewis B. and Dorothy Cullman Education and Research Building. Surprise, surprise: the Film Stills Archive is not a part of it. There are no plans I know of to set aside, in any of its spaces, the 2500 sq. ft that the Archive requires--not in the renovated Museum, nor the new education center, nor the Museum's building in Queens.

It is nearly five years since MoMA made the collection inaccessible to scholars, historians, authors and journalists. Those 4 million-plus stills, documenting the visual history of world cinema, continue to remain in cold storage in Pennsylvania [in a facility called the Celeste Bartos Film Preservation Center], untended and unused. Unused, I might add, except by MoMA curator Steven Higgins, who with great hubris embroidered his scant text with images from the Stills Archive in "Still Moving,"a book that highlights the Museum's Film and Media collections and resources. (Resource for whom, one might ask?) An exhibition of stills used in that publication are also on display at Hermes in New York.

As always, I remain grateful to all of you who took the time to write letters and articles, and offered words of support and encouragement. Change is always possible (the midterm elections are encouraging evidence), and perhaps, one day MoMA management will be without the leadership of Glenn Lowry. May all of the Museum's Archives endure.