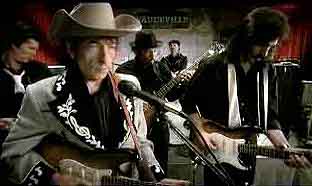 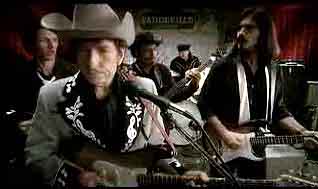 Here's a dazzling concept for a music clip: One shot, stationary camera, five guys. This performance of "Cold Irons Bound," from which Amazon.com is posting on their page for Bob Dylan's new album ''Modern Times'' (to be released Tuesday), lets you do your own cutting as you watch it. Keep your eye on Mr. Zimmerman as much as you want, but you'll no doubt find yourself focusing at times on the bass player, or one of the guitar players or the drummer. So, it's different every time you watch it. It's interactive! (And further proof that the integrity of mise-en-scene is aesthetically and morally superior to montage...)

Don't tell me you didn't see this one coming