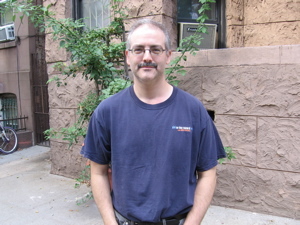 Matt Zoller Seitz, long one of my favorite film writers and the pioneering architect of the priceless House Next Door, is moving into full-time filmmaking. That's great news, and sad news for those of us who always look forward to his byline -- and, especially, the wit and insight that unspools beneath it. I want to compile a little "best of" sampling for Matt, just in case you haven't been following him, but I'm a little in shock right now. When I consider the exceptional, collegial atmosphere among our extended network of movie bloggers, and how much we learn and grow through exposure to one another's work, there's nobody of whom I'm prouder to consider myself a "colleague." You can read more about Matt's plans at the House:

Well part of it is… you know I produced a feature film, a low-budget thriller, a few years ago and then went on and directed a little movie myself. I have been working on projects that are in various stages of completion since then and it’s been slow going for a variety of reasons. But I would like to concentrate on that exclusively. I want to concentrate on filmmaking exclusively for a while and see how it goes because I’ve never given it my all. The two features that I’ve been associated with were done while I had a full-time job and a part-time job. So my thinking is, “well if I am not doing anything but filmmaking, what might I be able to accomplish?”

Whatever it is, I'm there. We'll catch up some other time. Meanwhile, we can all be glad that Keith Uhlich is in the House.

Yesterday, Matt posted a beautiful short film called "Some Other Time" in memory of his late wife Jennifer Dawson. The moment I saw the title I knew he'd chosen the version -- the greatest recording of one of my two or three favorite songs -- and he's set the music to movie with grace and understated eloquence.

This day was just a token, Too many words are still unspoken. Oh, well, we'll catch up Some other time.

Just when the fun is starting, Comes the time for parting, But let's be glad for what we've had And what's to come.